If you ask young women today who Gloria Steinem is, they haven’t a clue. Now they will, thanks to Christine Lahti, who brings Gloria Steinem to life at The Daryl Roth Theatre in Emily Mann’s bio-drama, directed by Tony winner Diane Paulus. Gloria: A Life, has the longtime feminist activist recounting her life that cumulates in a Q and A called a “talking circle”. Not bad, considering that Gloria Steinem is very much alive. This show has been put together by a female creative team, minus the token male teamed with a female on sound design. 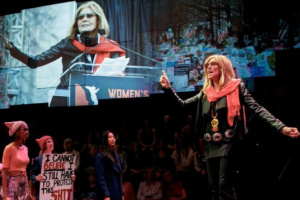 Lahti looks fabulous, decked head to toe in all black, with silver details of belt buckle and rings. To denote the passing of time, colored vests, scarves, and necklaces adorned the actress. An ensemble of six women play the male and female roles in her life. Her mother (a wonderful Joanna Glushak) gave up her own journalism career to focus on raising her daughter and ended up breaking down. Civil rights activist, Florynce Kennedy (Patrena Murray) and New York Representative, Bella Abzug (Glushak) are also represented. 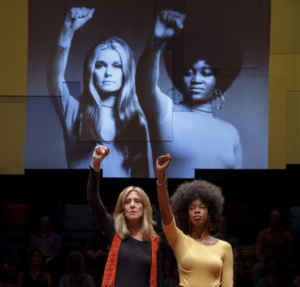 We travel back in time to Steinem’s graduation from Smith College, her early years in journalism, to the infamous 1963 assignment as an undercover Bunny at the New York Playboy Club and the launching of Ms.magazine in 1972. The show circles back to the present with the 2017 Women’s March in Washington, D.C., and footage of the two activists who cornered Sen. Jeff Flake during the Kavanaugh hearings.

Steinem’s affairs are left out, but her marriage to David Bell by her good friend Wilma Mankiller (DeLanna Studi), the first female Principal Chief of the Cherokee Nation, is talked about. At the time of the marriage, Bell had been facing deportation after overstaying his visa. Steinem had stated in the past, “marriage was the model for slavery law in this country”.

Diana Paulus has directed this with flourish. Emily Mann, the artistic director and resident playwright of the McCarter Theater in Princeton, N.J., has written a glossy biopic and women will eat this up. The projections by Elaine J. McCarthy lovingly show us the decades and where we were at.

This play is relevant in the age of the #MeToo and Time’s Up movements, but could someone tell me why, when there aren’t equal rights for women under our Constitution, this isn’t our main concern? The Equal Rights Amendment was first introduced to Congress in 1923 and still has not been passed.