Suzanna Bowling
Kendra Ellis-Connor (Kerry Washington) is going frantic inside a Miami police station. It’s four a.m. and she doesn’t know where her 18-year-old son, Jamal is. It is torrential raining and she has waited over a half hour to get some news. She is frantic; her nightmares are coming true.

Kerry Washington shines like an emblazoned wildcat in Christopher Demos-Brown’s mesmerizing play, American Son. Derek McLane’s stark police precinct allows the flashes of lightning – thanks to Peter Kaczorowski design – and the sound of the rain – courtesy of Peter Fitzgerald’s sound – to be the calmest part of this compelling drama. One we know from the start will not end well. All Kendra knows is her son was apparently pulled over by the cops and the second-hand Lexus registered to his dad had a bumper sticker stating, “Shoot cops with your phone whenever they make a bust”. 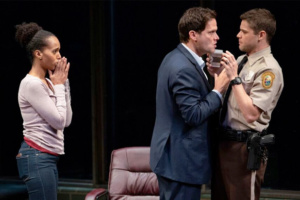 Kendra text’s Jamal insistently and makes phone calls to her ex-husband Scott. She is like a caged animal who has lost all sense of sanity, despite the fact she teaches psychology. Kendra’s anguish streams out of every pore; she is the mother of a 6’2”, young black man, who left the home angry. When the night officer, Paul Larkin (Jeremy Jordan) enters, she berates him, instead of using any kind of common sense to get information. Though the officer tells her there is protocol, Kendra is having none of it. She is condescending and ends up making the cop seem stupid and naive. The officer stays cool and has obviously had diversity training stating “No disrespect, ma’am, but we have a protocol”. She tries to get this man to see her son as a human being, stating “he can recite almost any Emily Dickinson poem,” she says, “and he’s afraid of clowns”. When Kendra talks about her child, she is warm and tender. 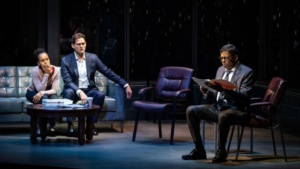 When her ex-husband of four months, Scott (Steven Pasquale) arrives wearing a badge, officer Larkin assumes he is the lieutenant, meant to mediate the case and gives him all the information he has. Turns out Scott is an FBI agent, but that doesn’t stop Kendra from being furious that he is given more help than she has and blames it on race. You see, Scott is white. For that matter, Kendra blames everything on race. Enter the African American lieutenant, Lt. Stokes (Eugene Lee) who arrives to take charge of the situation. Scott immediately gets into a fight with him and is booked for hitting an officer.

Stokes tells Kendra this is not a race issue and his advice to all black men when pulled over is “shut up and do what I say.” Kendra still accuses him of racism. In the end, Jamel was running with the wrong crowd, made some stupid mistakes, and despite being given the best education, rebelled. The result is devastating.

You understand why this marriage broke up and what brought this mismatched couple together. You understand that the best to come out of them was their son and our hearts break for the outcome. Jamal, as a child, when he saw his mother crying wants to put back her tears. He was loving and though we never meet him, we care.

The cast is fabulous, with both Washington and Pasquale holding their own and making us feel despite their characters flaws.

Kenny Leon directs this piece like a tense roller-coaster that crashed to its inevitable conclusion.

Demos-Brown makes us think, because though these characters all speak the same language, they fail to communicate at the most basic levels. What this play shows us is the divide no matter how far we have come.