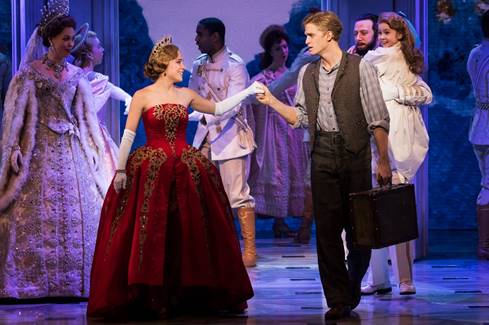 Following the evening performance on Thursday, January 17, Anastasia stars Christy Altomare and Cody Simpson will return onstage for a special acoustic performance of the beloved song “Once Upon a December.” Simpson will accompany the duet on guitar.

Tickets for Thursday night’s performance range from $69-169 and are available online at www.AnastasiatheMusical.com or by calling 212-239-6200.

From the Tony Award-winning creators of the Broadway classic Ragtime, and inspired by the beloved films, Anastasia  is the new Broadway musical that’s “one of the most gorgeous shows in years!” (New York Observer). This dazzling show transports us from the twilight of the Russian Empire to the euphoria of Paris in the 1920s, as a brave young woman sets out to discover the mystery of her past. Pursued by a ruthless Soviet officer determined to silence her, Anya enlists the aid of a dashing conman and a lovable ex-aristocrat. Together, they embark on an epic adventure to help her find home, love, and family.

Anastasia  has played to sold out crowds on Broadway since opening in April 2017, in addition to garnering multiple Tony, Drama Desk and Outer Critics Circle awards and nominations.

In May 2017, plans for international productions of Anastasia  across Europe, Asia, Australia and South America were announced. In its European premiere, Anastasia  began performances on October 3, 2018 in Madrid, Spain – the first city to open the show after Broadway. Stuttgart, Germany is the second European city to host the production and began performances on November 15, 2018. The list of international markets with plans underway for Anastasia  also includes Holland, Korea, Japan, Mexico, Australia, Brazil and more to be announced.

The US National Tour of Anastasia  began performances in Schenectady, NY and is currently playing across the country. The tour will travel to the Bass Concert Hall in Austin, TX, the Oriental Theatre in Chicago, The Golden Gate Theatre in San Francisco and 24 other cities during the 2018/2019 season with additional cities to be announced for 2019/2020.

The original Broadway cast recording is available at BroadwayRecords.com, Amazon.com and iTunes. The 75-minute album includes the Academy Award nominated favorite “Journey to the Past” alongside new numbers from the show such as Christy Altomare’s haunting “In My Dreams,” Ramin Karimloo’s passionate “Still” and Derek Klena’s heart-racing “My Petersburg.”