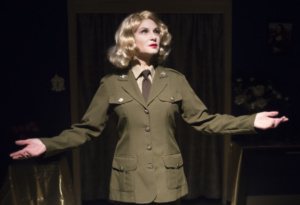 Cindy Marinangel completely embodies the spirit of Marlene Dietrich, the brave German actress who was known both for her sultry femme fetal and her outspoken political views. Marinangel draws the audience into Dietrich’s world, filled with vulnerability and fear. Ghosts from her past still haunt the actress as she prepares for a show in her dressing room. Skillfully directed by Judith Rose and written by renowned playwright, Willard Manus, this one woman show is touching, spirited, and exciting.

In May, 1960, Dietrich returned to Germany to perform on stage for the first time since fleeing the Hitler regime in 1939. Dietrich waits in the dressing room at Berlin’s Tatiana Palest Theatre, as she contemplates whether or not to go through with the recital. She has received death threats from Nazi sympathizers, who resent the Hollywood star for spending much of WWII entertaining American soldiers on the front lines. In their eyes she is a traitor. She must make a decision to bare her soul and possibly risk her own life, or stay out of the spotlight. 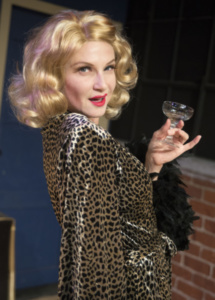 Marinangel is Marlene Dietrich. She disappears into her character, taking the audience on a ride through the psyche of the famous actress as she addresses a young leuitenent (he is imagined) and vulnerably shares stories of her home life, political woes, and Hollywood. We learn of the actress’ tumultuous realtionship with her only child, Maria Riva whom she desperately loves and cares for. She shares intimate details of her love life, a professed bi-sexual woman who often preferred women to men. She is candid, loveable, and downright vulnerable throughout and we grow to love and respect this woman. Marinangel’s interpretations of Dietrich’s torch songs are true highlights.

Kudos to the wonderful team including Willard Manus (playwright), Judith Rose (director), John Lant (producer), Jonathan Harrison (associate producer and stage manager), and Ken Cosby (lightening and sound desinger). Playing at Brickhouse Theatre in North Hollywood, this piece of history is not to be missed.

Suzanna BowlingApril 28, 2022
Read More
Scroll for more
Tap
The Terms of My Surrender: Don’t Fuck with the Librarians, Or You’ll be Sorry!
Unhinged: Women’s Work Short Play Festival Sometimes You Discover Something Marvelous