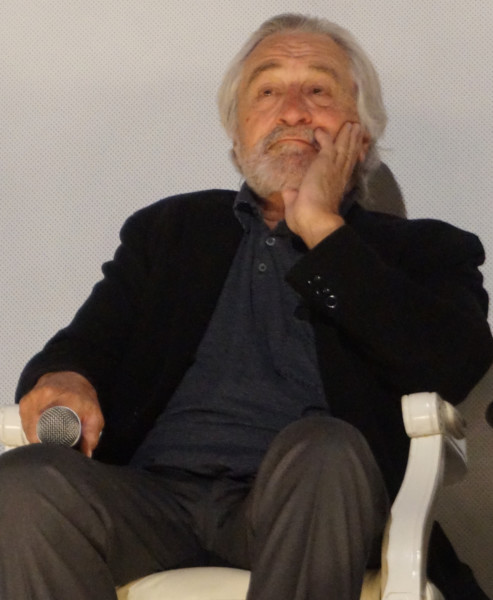 While master actor Robert DeNiro and director Martin Scorsese have separately established voluminous and highly praised careers, their work together has stirred hurrahs that have made them Olympians of cinema. Whether it was “Taxi Driver or “Raging Bull,” their collaborations have raised the level of cinematic art and established a dynamic that has been truly special. Over 50 years, the Academy Award-winning filmmaker has also crafted iconic gangster stories from “Mean Streets” to “Goodfellas” and “Casino” — and now “The Irishman” joins that list.

Scorsese’s three 1/2 hour long epic received incredible reviews when it opened the New York Film Festival, and now has racked up 10 Oscar nominations including Best Picture. Already available on Netflix, The Irishman was compared to a Rembrandt painting by The New York Times and the movie received an unprecedented 100% “fresh” rating from Rotten Tomatoes.

But getting the film financed for either big or small screen took a lot of wrangling until it became Netflix’s; again a project presented a daunting challenge for Scorsese, DeNiro and its producers. Recalled the legendary 76-year-old, “There’s a really long history [to this] because Bob and I really wanted to work together since we did ‘Casino’ which was in 1995, and we would check with each other and what we were doing, what projects we were doing, things like that, never quite connecting.”

Added the Oscar-winning actor, “Yeah, we were talking about two years before, and I said now I should just read it for research on Frankie Machine. And then I read it.”

This 76-year-old was referring to another project that had been under consideration, The Winter of Frankie Machine. Though it was pitched for possible production, it fell to this project to get made, based on a different book. How did it get started? Producer Jane Rosenthal had explained that, in 2007, she and partner DeNiro were trying to make another movie, “The Winter of Frankie Machine.” Said Rosenthal, “On a call with Paramount Pictures head Brad Bray, Bob brought up this other book that he had read and said, ‘Maybe we could do this together or maybe not.’ The book was ‘I Hear You Paint Houses,’ and we decided we should do that.”

With that, Scorsese responded, “When Bob presented the book to me, it seemed that he was very strongly attached to the character. We didn’t have to say much. After the phone call with Brad, I got Steve [Zaillian] to write the script. That was about 10 years ago.”

Based on Charles Brandt’s 2004’s book, “The Irishman” stars DeNiro [who is part Irish] as Frank “The Irishman” Sheeran, with Al Pacino, and Joe Pesci as Jimmy Hoffa, and Russell Bufalino, respectively. In the movie, Sheeran recounts both his job as a union official and as a hitman for the Bufalino crime family. Born in 1920 to Philadelphia-base house painter Thomas Francis Sheeran Jr., and Mary Agnes Hanson, the young Sheeran grew up in Darby, Pennsylvania — a small working-class Irish neighborhood on the outskirts of Philadelphia. As a World War II veteran, he learned his killing skills fighting in important battles in Italy.

As the killer recalls his Mafia life, the film flashes back to the hits that defined his career, and the part he claims to have played in the disappearance of life-long friend Hoffa, the former president of the International Brotherhood of Teamsters, who mysteriously vanished in late July, 1975, at age 62. A classic mobbed-up union figure fighting for his constituency — while taking wads of cash under the table — Hoffa provided a challenge for any actor.

For Scorsese, this production offered an opportunity for him to finally work with Pacino, who plays the legendary Teamster leader. As the award-winning actor remembered, “Oh yeah, it was because in today’s world, you have a lot of access to those kinds of characters because of people who know them, or knew them, there’s books about them. We had access to all that. When I played Serpico, the thought of him on a video somewhere was, I mean it was not even a thought, but I had him. That’s always an advantage. But Jimmy knew so much about it, I grew up at the time of it.”

The movie also re-teamed the director with DeNiro and Pesce, who last worked together maybe 25 years ago in Casino. As DeNiro noted, “Opportunities passed and then Joe and I would talk about the movie too. We went through our own process of talking about it as far as all that goes. But I’m just happy we all finally got to do it because it did take a long time. The way that Martin was able to do it and the way that we wanted to do it, we were lucky to have the people that put up the money.”

Scorsese agreed. “Yes, that was the key! We couldn’t get a backer, there was no way, for years. But, ultimately it was [Netflix’s head] Ted Serrandos. He actually backed the film and financed it.”

Still, there was another huge challenge facing the director. The story spans three decades and more. And that offered a unique opportunity. “[Visual effects supervisor] Pablo Helman and Maya had come up with a solution for the de-aging process that wouldn’t interfere with Bob and Joe — like talking to each other with helmets on or tennis balls on their faces. We did tests a few years ago, but it was a costly experiment. Yet Ted and everyone at Netflix said, ‘Go with it!’ Creatively, they turned to us and there was no interference of any kind. There were some notes from time to time and we addressed them or not.

“The point is that it was necessarily an interesting hybrid in a way, because it hung in the balance [for] what a film is. All of this is an extraordinary time of change, but when it comes down to it, ultimately, we all felt the picture had to be made for ourselves really. We had to check in with each other; you know, as you grow older, people change differently at times and you grow separate away from each other. This was not the case; we just kept coming back and still have a telepathic way of working together, particularly with certain characters. And, It’s my first time working with Al, finally!”

To which, Al chimed in, “I read the script, I promise!”

Scorsese replied to that: “I know, because the marks you hit and the lines were very specific. Certain people think he would have a lack of appreciation… You know it’s there, it’s in the script, but it is the interpretation.

The 79-year-old master thespian added, “Somebody said to me, about the age thing, and they showed me this thing of Bob doing Good Fellas, and I thought, ‘why is he doing this again?’”

The seasoned moviemaker explained, “I always told this story about the first day shooting with you, getting out of the chair. It was you and me, and you were complaining about “those Kennedys they go to war with these people” — remember on the TV? That was the first time I have ever worked with you too and I said, ‘That’s great!’  It was really good what he did and I said one more take and he gets up out of the chair, yells at the TV and leaves again, at which point I say, ‘Good, maybe we’ll do one more and I think we can move on.’

“There were two cameras going, and this was [with] the three lenses on each camera. I think it was [cinematographer] Rodrigo Pietro, Pablo and I think Gary. It isn’t just about lenses and computer imagery. It’s about posture, it’s about movement, it’s about everything, so there were people on each element dealing with the actors on this. And Gary came over and said, ‘I have to tell you something.’ And I’m like ‘What?’ and he says, ‘He’s supposed to be 49.’ I said, ‘Why are you telling me?’ he says, ‘No, you have to tell him!’ I walk over and say, ‘Al, everything’s fine, but one of the things is that when you get out of the chair, you’re supposed to be 49.’ Al’s like, ‘Oh God, Okay!’ We were sculpting this whole thing, it was like working models in a way, plus the truth about how they’re interpreting. It’s an extraordinary experience!”

And with in mind, Pacino acknowledged, “Young again!”