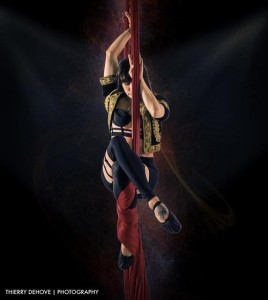 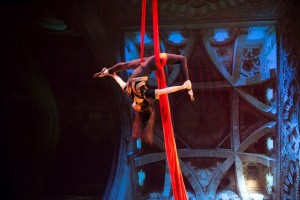 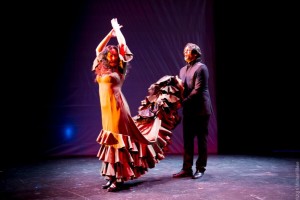 Prior to the show Matias Letelier impressed my guest and I with his magician ship. For me he guessed the card I was holding and the one I was thinking of to trick him. For my friend Joanna he guessed her first crush and wow’d her. We can’t wait to catch his act downtown at the Players Theatre on Monday. 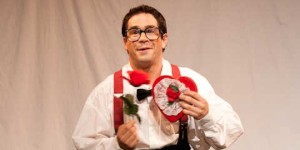 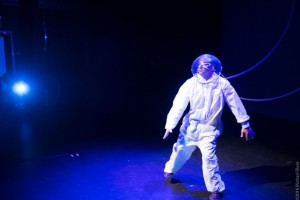 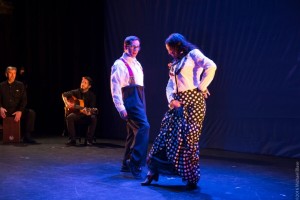 Performed in front of a projected backdrop of lush architectural images created by photographers Thierry Dehove and Marc Goodwin. Most of the projections are of exquisite mosques and temples showing the architectural beauty. We follow Mark Gindick (Big Apple Circus) a Peter Scolari look alike, as he explores the music of Spain. He is hilarious dressed in a bubblewrap suit dancing to “Moondance.”Mark’s unique blend of vaudeville, dance, and physical comedies is so entrancing. I am not usually someone who is  a clown fan, I am now a fan of Mr. Gindick fan. Vocalist Ismael Fernandez, Guitarist Angel Ruiz and the passionate Sonia Olla commenced into the Flamenco in song and dance. Sonia choreographed the number “la isla bonita” for Madonna’s tour and was seen in Madonna’s latest documentary. Her work is rhythmically moving. Next up was Sarah Sophie Flicker the graceful  aerialist who became the moon with  contortionists Anna Venizelos and Olga Karmansk. The later bended into pretzel like shapes that were both sensuous and beguiling. These two are so thin I wanted to feed them. 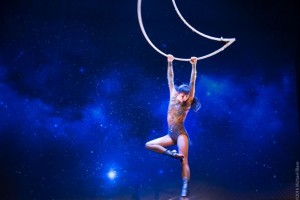 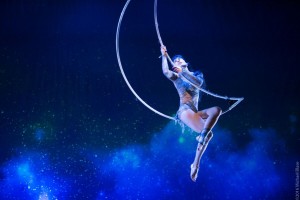 In act two AJ Silver captivated the audience with his magnetism and his control of the Boleadoras. He also whipped things into shape with cracks of the whips. Together with Ismael Fernandez and the  Sonia Olla they created a sound that was festinating to the ear as well as pleasing to the eye. Creating a visual splendor Aerial Moon and Silk wrapper Amanda Topaz (Rockitaerials) bedazzled. 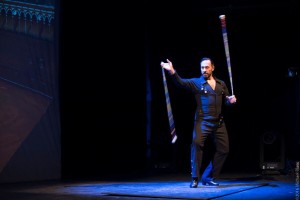 The evening was choreographed by Sonia Olla, Pedro Ruiz, and Valeria Solomonoff, and directed by Mark Lonergan. Mark is the Founding Artistic Director of Parallel Exit, a three-time Drama Desk Award nominee for Unique Theatrical Experience.

This was a magical evening that my friend Joanna can not wait to tell he sister, her son and her New Jersey friends all about. She is planning on repeating this experience Friday night.