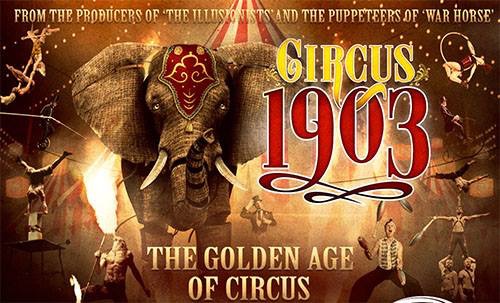 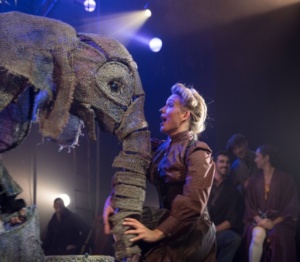 Broadway in Chicago’s latest, Circus 1903 The Golden Age of Circus, is a wildly imaginative tale of a time long gone by. Like an archival photograph brought to robust and vivid life, this visually spectacular show unites performers from around the world under the “big top” that is the stage of the Oriental Theatre. Combining multiple acts that delivered self-described “fleeting moments that live forever in your memory.” Of course there were thrilling daredevils, a Bearded Lady and Strong men to both delight and tickle, but the real wizardry involved was the masterful puppetry of the elephants; a fully grown mother and her whimsical baby calf, Peanut. Utilizing the same techniques that brought to “life” the stallions in National Theatre’s War Horse, these crafty puppeteers’ work truly impressed.  It would be impossible to craft a tour like this using real animals, however the artistry involved will move you in a similar manner to witnessing  the opening number of Disney’s The Lion King. Director Neil Dorward kept the show’s pace quick, but allowed each act suitable time to astonish.  Adding Angela Aaron’s impeccable recreations of turn-of-the-century circus performer costumes tickled the eye as well.  Touring the country before its inevitable debut in New York, Circus 1903 The Golden Age of Circus is an old-fashioned, family friendly, bang-for-your-buck extravaganza, that both entertains and impacts. 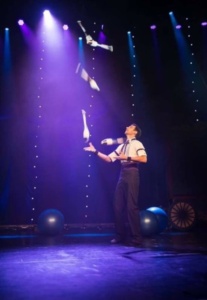 The evening began with Ringmaster Willy Whipsnade (David Williamson) rapid-fire tossing popcorn and one-liners at the audience. Explaining the “circus is the magically unexpected”  the next hour was filled with unique performances from all three rings. Executed across a set mimicking a circus big top tent, design by Todd Edward Ivins, we marveled at the gravity defying antics of a trio of acrobats on a teeter board, billed as The Flying Fins. Arthur Ivankovich, Petter Vatermark, and AJ Saltalamacchia back-flipped and cartwheeled a dozen feet about the Oriental’s stage.  We gasped during the “Ballet of the bicycle” performed by the Cycling Cyclone (Florian Blummel), we recoiled at the Side Show contortionists, The Elastic Dislocationist (Senayet Assefa Amara) as she folded and unfolded herself  like a human pretzel and we were collectively enchanted by the elegance of Lucky Moon, an aerialist (Elena Gatilova) straight out of Cirque du Soleil. The fanciful “foot juggling” from The Fratelli Rossi (Alejandro and Ricardo Rossi) a duo of handsome, ever-grinning Italians who tossed one another in the air off of their feet, brought beaming smiles to the faces of the entire audience. 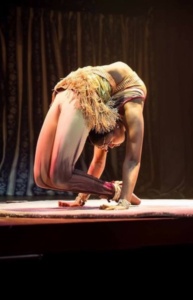 Not to be left out, Ringmaster Willy Whipsnade worked audience members into the act too.  Bringing an adult volunteer to the stage for a sidesplitting, knock the cigarette out of an audience volunteer’s mouth with a whip, ended with collective chortles both on stage and off. Next, bringing a quartet of “ankle bitters” aka, little kids, to the stage, those four children brought the prerequisite “awwws” from the audience and allowed for a quick set change to happen behind the scenes, without interrupting the staged antics. Concluding the spectacle, juggler, The Great Gaston (Francois Borie) proved why he is referred to as one of the world’s fastest jugglers. Spinning pins behind his back, between his legs and into the air at a delightfully fervent pace, this juggler also drew huge applause. No circus would be complete without a high-wire act and The Lopez Family delivered.  Riding unicycles, doing backflips and jumps that concluded with the sister doing a perfect split while suspended on a pole balanced between her brothers, while suspended on a thin wire, left the audience breathless, as any dramatic high-wire act should. Paul Smith’s lighting design punctuating everything perfectly. If I were to add anything, perhaps a trapeze act (which seemed sorely missing) and a center ring Lion act. The puppetry of the elephants proved so elegant. Couldn’t a lion, tiger or panther be replicated in a similar style? 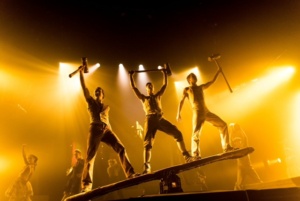 Bold and unique, Circus 1903 The Golden Age of Circus, may be inspired by days gone by, but happily, didn’t feel dated at all.  I was impressed by the diverse collection of people in attendance, all completely engrossed by the ever-unfolding staged proceedings. Blending elements of nostalgia an astonishment, Circus 1903 The Golden Age of Circus proved animated family entertainment is very much alive and well at the theater. 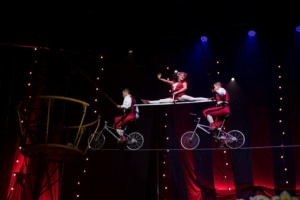 Broadway in Chicago’s Circus 1903 The Golden Age of Circus is now playing through March 26, 2016 at the Oriental Theatre

WriterAugust 12, 2022
Read More
Scroll for more
Tap
Alvin Ailey American Dance Theater – The Power and Precision Returns
Carol Woods And Spamilton Are Just Some Of The Winners At The Mac Awards