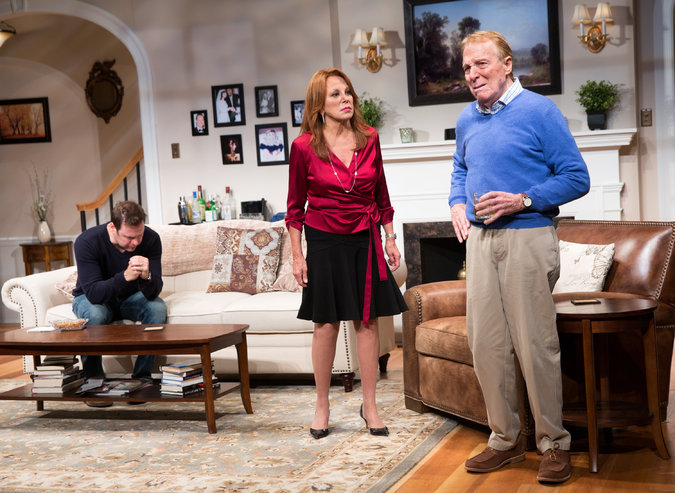 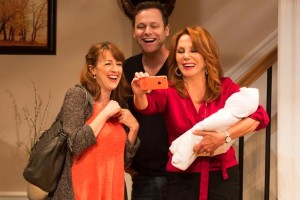 Joe DiPietro’s Clever Little Lies, at the Westside Theatre, is a light comedy romp. Witty, clever, on topic about infidelity and what love and marriage really mean, this was an afternoon of good clean fun. The show follows new father Billy (George Merrick) as he tells his father Bill Sr. (Greg Mullavey) about the love of his life, a 23-year-old trainer named Jasmine, who is not his wife. He fully discribes the way this nubile young thing thrills him. His Dad is sure this is TTMI (too much information). Billy then swears his father to keep his secret from his mother Alice (Marlo Thomas). As soon as Bill Sr. gets home Alice has wormed out the secret. When his mother invites her son, his wife (Kate Wetherhead) and their new baby to dinner, secrets get revealed and not the ones you expect. Infidelity and the pursuit of wanting more is an age old subject that is handled in a fresh new way here.

Though the draw is of course Ms. Thomas, who not only is welcomed warmly by the audience, but shows her acting chops with perfect comic timing. She shines as Alice and we follow her journey. I really loved Greg Mullavey performance. He has the most complete journey and by the end we feel for this man who lives by his words. We laugh as his son describes his blowjobs and as he tries to keep his promise to his son as his wife worms the truth out of him. When he’s relates to his wife we believe this relationship. By the end we know this man and wish for him a better ending. Kate Wetherhead, as the wife who has decided being a wife is exactly what she wants is a throw back to a time gone by. who I didn’t buy was George Merrick as Billy. I just can not see a gorgeous  23 year old trainer falling for this man to the point of excessively texting him. If he were built, handsome or really rich, yes, but even girls who are after rich fish thrill for the day off an don’t text to annoyance.

David Saint’s direction, is spot on and we feel as if we know this family as we laugh and grieve with them.

DiPietro won the Tony Awards for Memphis but is well known for I Love You, You’re Perfect, Now Change and The Toxic Avenger. DiPietro creates a play worthy of Neil Simon. I believe these people and enjoyed spending time with them.

This is one fun time at the theatre.