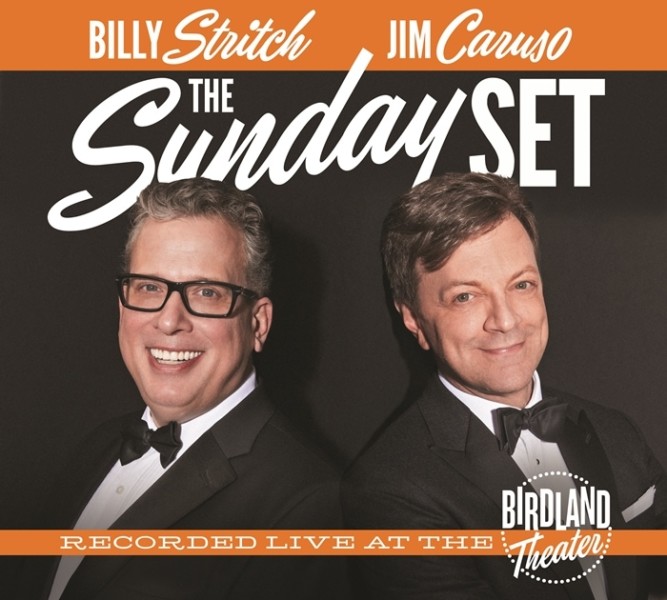 Club44 Records is pleased to announce the release of The Sunday Set, the new album from Billy Stritch and Jim Caruso on Friday, January 21. After launching the label in 2019 with Christmas at Birdland (which Stritch and Caruso recorded with Klea Blackhurst) and following up last year with Billy’s Place, a solo excursion from Stritch, the team now reunites for this new selection of urbane standards, jazz favorites and sly comedy numbers. The album, recorded live at The Birdland Theater, features vocals from Stritch and Caruso, with Stritch on piano and Steve Doyle on bass.

Jim Caruso explains: “In February of 2019, Billy, Steve and I performed a concert engagement at The Birdland Theater. The room still had that new nightclub smell, and we were rarin’ to christen it with our own brand of musical mayhem.  After almost a decade of swinging the nights away at Bemelmans Bar at The Carlyle Hotel, it seemed right that we travel a few blocks west to do a Sunday run at our other home-away-from-home. After all, Birdland had been our roost for sixteen years-worth of ‘Cast Party,’ the open mic extravaganza we host. That run was a blast, as is any night I get to sing, harmonize and cavort with Messrs. Stritch and Doyle. Billy and I have been friends for almost 40 years, and Steve has played every ‘Cast Party’ since 2003. There’s history there. Rob Polanco, our trusty technician, recorded each show – and I promptly put those tracks in a drawer.”

“Cut to the pandemic,” he continues. “After a few months of hiding under the covers, I remembered the recordings and started listening. They weren’t half bad!  Billy agreed, so we sent them to Wayne Haun, the co-founder of Club44 Records, and owner of the best ears in the business.  He gave the thumbs-up to a live record project, and here we are. Some of my all-time favorite recordings have been live concerts. They catch a moment in time that lives on forever. The listener is privy to the fun, the atmosphere, and can sense the crowd’s excitement. You can only imagine how delighted I am to add The Sunday Set to the pantheon of live recordings.”

Billy Stritch adds, “It’s really exciting to have a new release on Club44 Records. Jim and I have been working together for years and we both have a long association with Birdland. So it seems fitting that this album was recorded at the Birdland Theater. It’s such a wonderful and warm space to perform in and has a very intimate feeling. I think that comes through in this recording. I know Jim and I both feel very fortunate to have such a perfect “home base” in New York. Steve Doyle is our terrific bass player and has been with us every Monday night at Cast Party and all those Sunday nights at Bemelmans Bar – so it’s appropriate that he’s on this recording as well. He’s our musical anchor.”

Wayne Haun of Club44 Records comments “The old saying ‘you can’t make old friends’ is clearly evident when I listen to this album. The chemistry, response and overall musicality between Jim and Billy cannot be taught. Years of experience and true brotherhood are at work here.”

Jim Caruso is the host of “Jim Caruso’s Cast Party,” the wildly popular weekly open mic night that has brought a sprinkling of Broadway glitz and urbane wit to Birdland in New York City every Monday night since 2004. “Cast Party” has been seen at Jazz at Lincoln Center, across the country, and, most recently, on YouTube as “Pajama Cast Party.” Jim made his Broadway debut alongside Liza Minnelli in the Tony Award-winning Liza’s At The Palace!, singing, dancing and celebrating the music and arrangements of Kay Thompson and the Williams Brothers.  He has won six MAC Awards and eight BroadwayWorld Awards for his work in nightclubs, performed with the New York Pops in a tribute to Kander & Ebb, with Rosemary Clooney celebrating Bing Crosby, and sang the songs of Hope & Crosby with Michael Feinstein at Carnegie Hall. Jim was honored to sing with Barbara Cook, Lauren Bacall and a bevy of Broadway stars at President Clinton’s First State Dinner at the White House. He also books and produces the “Broadway at Birdland” concert series, and performs regularly with Billy Stritch at Bemelmans Bar at The Carlyle Hotel. Jim’s two solo albums, The Swing Set and Caruso Live and In Person, are available online.

Billy Stritch is one of the premier singer-pianists on the New York and national jazz and cabaret scenes. He began his career in Houston, Texas, where he formed the vocal trio Montgomery, Plant and Stritch. The trio performed all over the world from 1983 until they disbanded in 1990. A chance meeting with Liza Minnelli in 1991 resulted in her asking him to create vocal arrangements for Liza’s record-breaking extravaganza Stepping Out at Radio City. Billy recently toured with the legendary Tony Bennett, as his pianist and musical director. A solo entertainer in his own right, he has performed his own shows (including tributes to Mel Tormé and Cy Coleman) across the country. Billy also serves as music director for such leading vocalists as Marilyn Maye, Linda Lavin, Linda Eder, Christine Ebersole and Paulo Szot. He is the co-writer of the Grammy Award-winning song “Does He Love You,” recorded by Reba McEntire and Linda Davis. The single reached the number one spot on the Billboard Country music chart, winning a Grammy Award and selling over five million copies. A new version of the song was released in 2021 by Reba and the legendary Dolly Parton.

CLUB44 RECORDS – based in the Music City of Nashville, Tennessee – is a new independent label which aims to highlight the Broadway, cabaret and jazz genres, preserve the American Songbook, and provide a home for artists who represent this timeless music. Following their premiere studio release, Christmas at Birdland, the label has presented Les Misérables Symphonic Highlights,arranged, orchestrated and conducted by David T. Clydesdale and Brian Eads; Love Notes, the new album from Tony Award and Golden Globe winner Linda Lavin; Billy’s Place from Grammy Award winner Billy Stritch; Act One from rising vocal star Nicolas King; and Jane Monheit’s Come What May, which celebrates the international Billboard #1 pop/jazz vocalist’s 20th anniversary as a recording artist. Club44 Records also serves as the creative home of many other singers, instrumentalists and writers. All releases are distributed digitally through Green Hill Productions/ Universal Music Group and to retail outlets by Provident/Sony. Club44Records.com

2) You Are My Sunshine (Jimmie Davis and Charles Mitchell)

5) What Did You Do to Your Face? (Susan Werner)

7) Isn’t It a Pity? (George Gershwin and Ira Gershwin)

8) Sinatra Saloon Medley: In the Wee Small Hours of the Morning (David Mann and Bob Hilliard) / One More for My Baby (And One More for the Road) (Harold Arlen and Johnny Mercer) / Angel Eyes (Earl Brent and Matt Dennis)