Within two songs of seeing Clueless, The Musical, I turned to my guest and asked: “Is this a jukebox musical?” And if so, how did they get that many lyricists to agree to re-writes. I still don’t know that answer, as the credits come on the page after all bios. In a strange way, it is hidden. There is no set list with which characters sang what. Who did the music and lyrics? Also, there is no book writer, only “By Amy Heckerling” after the title and “Screenplay by Amy Heckerling,” before the choreographer and director. More on this later. 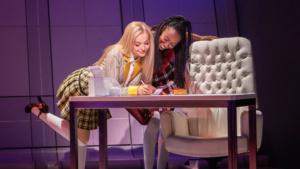 For those of us who love the 1995 tween cult hit, Heckerling’s script is intact. Cher (the adorable Dove Cameron) is back in command, stating her famous “as if”, and wearing sunshine yellow plaid. Her girl, Dionne (the hip Zurin Villanueva) is right beside her. Loosely based on Jane Austen’s 1815 novel Emma, Clueless, The Musical updates the setting to modern-day Beverly Hills. 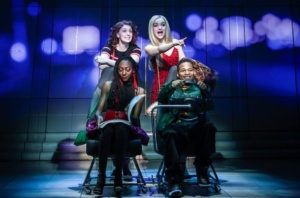 We follow the plight of Cher Horowitz (Cameron), a well-intentioned but superficial girl, who is attractive, popular, and extremely wealthy. Her father, Mel (Chris Hoch), is a ferocious $500-an-hour litigator. Her mother died during liposuction. Cher’s best friend, Dionne (Villanueva) is also rich, pretty, and hip and in a long-term relationship with Murray (Gilbert L. Bailey II). Cher’s socially conscious ex-stepbrother, Josh (Dave Thomas Brown) disapproves of though secretly adores her. Josh and Cher spar constantly but it is like the Shakespeare line, “thou doest protest too much.” 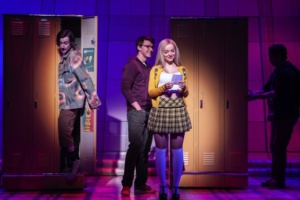 Cher plays matchmaker for two lonely, nerdy, hard-grading teachers, Mr. Hall (Again Mr. Hoch) and Miss Geist (an off-key Megan Sikora), so she can renegotiate her grade. When she sees their newfound happiness, she realizes she enjoys doing good deeds. Cher decides to give back to the community by “adopting” a “tragically unhip” new girl at school, Tai Frasier (Ephie Aardema). Cher and Dionne give Tai a makeover. Cher also tries to extinguish the attraction between Tai and Travis Birkenstock (Will Connolly), an amiable skateboarding stoner and slacker, and to steer her toward Elton (Brett Thiele), one of the popular crowd. 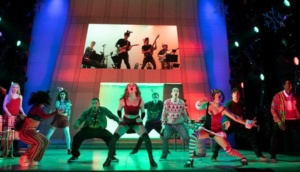 The cast of Clueless, The Musical Photo by: Monique Carboni

Elton rejects Tai, and attempts, unsuccessfully, to seduce Cher. A handsome new student at their school named Christian (Justin Mortelliti) becomes the boyfriend target of Cher. Murray spells it out to her and Dionne that Christian is gay.

Tai surpasses Cher’s popularity, Cher fails her driving test, Tai tells Cher of her crush on Josh and wants Cher’s help to “get” him. Cher says Tai is not right for Josh, and they quarrel, ending with Tai calling Cher a “virgin who can’t drive”. Feeling “totally clueless”, Cher reflects on her priorities and her repeated failures to understand or appreciate the people in her life.

After much soul-searching, Cher realizes she loves Josh and all’s well that ends well.

The show ends with Mr. Hall and Miss Geist’s wedding as Cher and Josh, kiss.

Dove Cameron (a Daytime Emmy winner for Disney’s “Liv and Maddie”) is winning and holds her own. Her chemistry with Dave Thomas Brown is romantic and believable. Zurin Villanueva brings to mind Stacey Dash, the first Dionne, and you feel as if you know her. Brett Thiele has some killer moves as the bad boy Elton, but it is Will Connolly who channels the Sean Penn role in “Dazed and Confused” that steals the show. His version of “Mmmm Mmmm Mmmm Mmmm,” which is turned into “It’s the Crash Test Dummies’,” brings back this era.

Also from the movie soundtrack, we get “Kids in America,” “Rollin’ with My Homies” and  “Supermodel.” Added in are “What if God was one of us?” which becomes “What if Cher didn’t have a trust?”. Other songs that are given this remake are “Barbie Girl,” “Bye, Bye Bye,” “U Can’t Touch This,” “One of Us” and more that just seemed packed out of random. If you are going to go to all this trouble, why not hire a songwriting team, instead of this mishmash of songs already written. This is highly inconsiderate to the lyric writers.

Amy Clark’s costumes are spot on and Beowulf Boritt’s yellow-plaid set is reminiscent of Bye Bye Birdie and is tied up with a bow.

Despite what is wrong with this show, it is a lot of fun with its charismatic leads and high-octane energy levels.

He Says: Large Projected Film Work Frames a Strange Window: Network on Broadway and The Turn of the Screw Off at BAM in Brooklyn
Be More Chill and Inside the 2018 Joe Iconis Christmas Extravaganza at Feinstein’s/54 Below