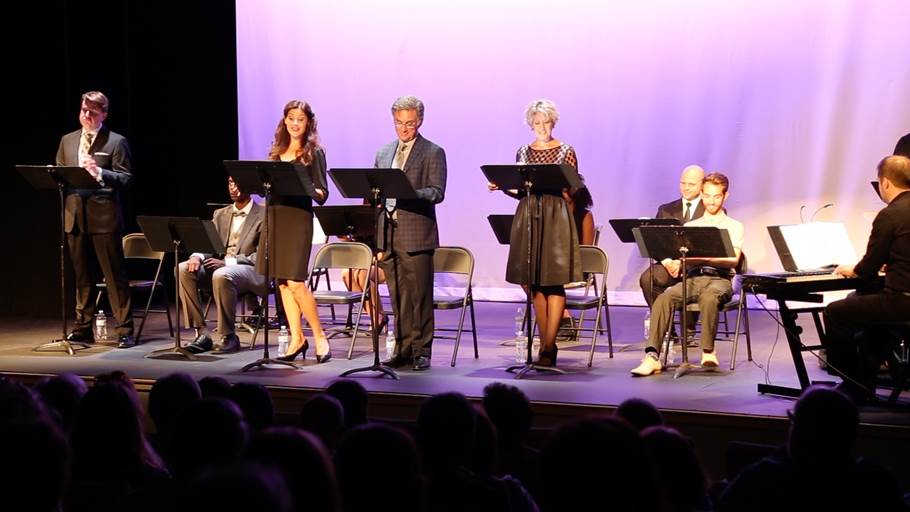 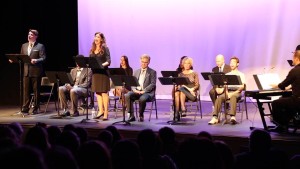 This has really been a quick two years. It seems like just yesterday, the Festival of Works in Development team were debuting their ambitious concept, with the hopes to advance new works in the Windy City limits.  Here we are, almost a dozen shows later, at the conclusion of the second full season, ending with a bang, as it were. Tuesday evening brought us Code Name: Cynthia, an ambitious World War II spy flavored musical, produced for the evening by both Elaine Cohen and FWD Theatre Project. This may be the final staged reading of the season, but it was actually a first for the FWD team. Code Name: Cynthia is the inaugural show actually crafted by members of the FWD Team; Karen and Steve Multer. On top of her duties as the FWD Communications Director, Karen Multer proved herself a most talented composer. To call this score sumptuous would be an understatement. It took my breath away. Her partner in crime, both personal and professional, book writer and lyricist, Steve Multer. As if juggling all of these responsibilities wasn’t daunting enough, Mr. Multer also stepped in, playing one of Cynthia’s potential paramours in the show, when another actor had to drop out. FWD’s Artistic Director, Michael Gillis, put it best when speaking to the audience directly before the show. “In not-for-profit, we have to wear many hats and fill in wherever we’re needed.” Good thing they didn’t also need catering for the evening as well. 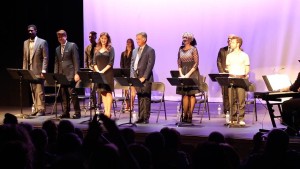 Code Name: Cynthia was loosely based on a true story of an unsung American patriot, a female spy named Amy Elizabeth “Betty” Thorpe. She worked for the OSS (The Office of Strategic Services) stationed abroad, and uncovered secrets for the Allies during the second World War. Washington D.C. has often proven an intriguing “chessboard” where honor, duplicity, sex and political ethics are all willing participatory pawns.  Filled with romance, suspense and intrigue, I found Cynthia terribly witty, laugh out loud funny, dramatic, pompous (in a good way) and entirely enjoyable from start to finish. Directed by Elizabeth Margolius, this cast of 10 had just 24 hours of rehearsal before bringing Cynthia to life. Engaging music direction supplied by Jeffrey Poindexter, who also played the piano, Bass player Cory Biggerstaff and drums by Christian Moreno, entertained. The history of this show so far is also quite notable.  Before this Chicago reading, Code Name: Cynthia received its initial premiere production in 2015 in Washington D. C. where it received two BroadwayWorld Award nominations, including Best World Premiere Musical, and DC Metro Theater Arts’ 2015 Best Musicals at Professional Theaters honors. The show was also selected for the 2015 Kennedy Center Page-to-Stage Festival.  I found it entirely appropriate this show, which so cunningly uses Washington D.C.’s social-political landscape as its backdrop, had its premiere in the Nation’s Capitol. 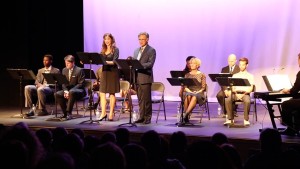 The compelling clandestine adventures center around socialite, Betty Thorpe (Jennie Sophia) a beautiful yet idealistic jetsetter with a secret. She is just retired from the spy game. Yearning for a normal life, she decrees “Good-bye Cynthia, hello Betty.” Smitten with a British diplomat, Arthur Pack (Evan Tyrone Martin) who was recently announced her fiancé, Betty has returned stateside for a more traditional existence. The action rapidly unfolds at her unwitting mother’s estate. Cora Wells (Kathy Jaeck) is a well known and well to do, widowed, society hostess, both written and played impeccably over the top. Think a depiction graced with bravado by the glorious Holland Taylor and you have Cora. At the party there is an uninvited guest who captivates Cora but bothers Betty. William Stephenson (Gene Weygandt) hastily romances Cora while simultaneously blackmailing Betty into resuming her spy career. To borrow an apropos quote from The Godfather flicks, “just when I thought I was out, they pull me back in.” I have sat through many a piece which romanticizes and glamourizes war time exploits. The tragic heroine here constantly reminds herself she has blood on her hands, but with that said, Betty is most certainly one of the good guys. She spies for the Allies in Europe, her reconnaissance and surveillance, while stationed in Paris, which has subsequently fallen to the Germans, is vital to the War effort and necessary in hopes of bringing the World War II to a hasty conclusion. “Respectable people avoid war” Cora coos.  “Wars aren’t won by respectable methods” Betty reminds her mother. The narrative spans over a two year period, 1940  to 1942, with a linear time line announced by members of the ensemble, including Ciera Dawn, Jhardon Milton, Brennan Roach, and Brittany Wolf. 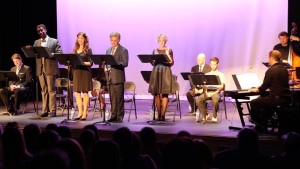 There are two more men who cross Cynthia’s path. Frenchmen and double agent, Charles (played by Steve Multer) and safe cracking expert, Cracker (Aaron Davidson). Cynthia may begin her tete-a-tete with Charles as an agent, but she quickly grows smitten to her Parisian mark’s noticeable charms. As these two are swept away in their burgeoning romance, they are tasked with stealing books filed with codes that will strike a defeating blow to the Nazi’s. Enter Cracker who is necessary to instruct Cynthia on the art of safe cracking. As she grows defiant of her mission, Stephenson threatens her with the fact her fiancé, Arthur, will be killed if she doesn’t  follow through on the mission. “In one job, save Arthur and save the world” she laments. This wonderfully sophisticated love triangle and espionage-tale has a delicious 11th hour plot twist in act two that I will not spoil.  Suffice to say it was as unsuspected as it was a satisfying conclusion to our superwoman’s saga.  Filled with intelligent and witty dialog including “Steal a secret, leaving your morals at the door” and “My mother and Congress, the country’s leading isolationists” Code Name; Cynthia is a thinking man’s musical. This perfectly human drama, wonderfully clever and refined from start to conclusion. “It’s the perfect plan, if we don’t die.” 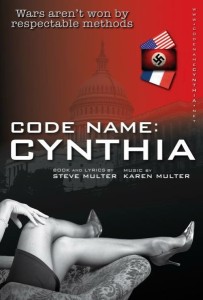 As a musical, the score is a masterpiece. Whether sung in full ensemble pieces like “Somewhere In Washington,” or in tantalizing solos, as Betty croons “I Want This Life,” there is something for everyone’s tastes. The utterly charming “Ca, C’est Mon Reve” is a delicious dalliance between cavorting spies, Charles and Cynthia.  The camp comradery of mother and daughter during “Birds Of A Feather” amused while the essential repetition of “Until You Learn” as Cracker and Cynthia methodically rehearse the steps behind their theft of Nazi’s secret books, these opulent orchestrations cry out to be heard by the masses. Smart and pointed lyrics enhanced by mesmerizing melodies. I only cried “foul” when discovering there was no soundtrack to purchase at the show’s conclusion.

Brimming with espionage, romance, betrayal and high-stakes suspense, Code Name: Cynthia has so much refined potential, I hope to see the clandestine adventures of this adventurous spy remounted very soon.  I was able to catch up with Karen and the end of the evening and she shared with me “working with our supremely talented cast, led by Jennie Sophia, Gene Weygandt, and Kathy Jaeck Hall, has been a rare treat. Our director, Elizabeth Margolius, is truly an actor’s director. Her passion for the story and characters was inspiring to watch. Not only did she manage to actually workshop the musical, which is difficult to do with limited time, she was instrumental in guiding us toward making some significant structural changes as well. The end result is a musical that is tightly crafted, impactful, and relevant.”  Multer went on to say “We’re very grateful to the entire creative team; the cast, music director Jeffrey Poindexter, FWD, and our gracious sponsor, Elaine Cohen.” After taking a well deserved bow, Multer reminded me the FWD Team will soon be ensconced in selecting their season three pieces.  No rest for this tireless twosome and their comrades in the arts.