Come From Away 9/11 Musical Headed to Broadway

Come From Away 9/11 Musical Headed to Broadway 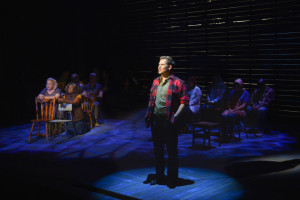 Chad Kimball Come From Away

A new musical is headed to Broadway from Seattle Repertory Theatre. Come From Away is a co-puduction by Seattle Rep and La Jolla Playhouse. The show chronicles in one briskly engrossing act a small Canadian town’s response to the 9/11 terrorist attacks on the U.S. Written by Canadian duo Irene Sankoff and David Hein, this chamber piece musical is a true-life tale set in the remote Atlantic community of Gander, Newfoundland — “the Rock,” as the locals call it. On the morning of Sept. 11, 2001, the town learns of the terrorist attacks — and the 38 commercial flights set to arrive imminently at their sleepy airport. A good-natured local cop (played by Eric Ankrim), a nervous young TV reporter (Kendra Kassebaum), the homespun Gander mayor (Joel Hatch), a take-charge good Samaritan (Astrid Van Wieren)  snap into action, to prepare for over 6,000 new arrivals who’ll nearly double Gander’s population. On the plane are efficient, frustrated female pilot (Jenn Colella); a wisecracking gay couple (Chad Kimball and Caesar Samayoa); An Egyptian traveler (also Samayoa); A wary African-American passenger (Rodney Hicks) ; the mother (Q. Smith) of a New York firefighter; a shy Englishman (Lee MacDougall); and a lonely Texan (Sharon Wheatley). All the characters, are based on actual people. Jews, Muslims and Christians simultaneously pray together, in their own ways, as strangers become friends.

Next stop Washington, D.C., September-October, then  Toronto from November into early 2017. The musical will then take the stage at an as-yet-unnamed Broadway theater next spring.