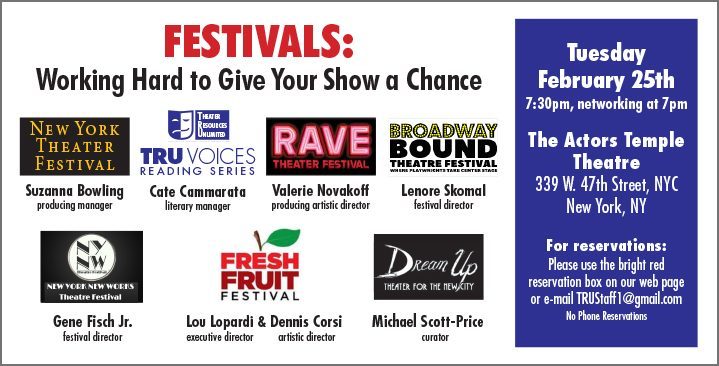 If you think it’s daunting to produce yourself in a festival, take a moment to consider the complexity and challenge of running the festival itself. Here’s a behind the scenes peek at the history and evolution of a range of these safe havens for developing new work … why and how they came into being … what their mission is (and whether it is in sync with your own goals) … and how they may need to evolve and adapt to changes in our cultural and political environment. One of the major festivals just closed its doors, and others have gone on hiatus to regroup and redefine themselves. What changed? It isn’t easy, and they need you to be a part of their producing community. So come and learn all the basics about the submission process, deadlines, what’s expected of you and what you can expect from them.  Doors open at 7:00pm for networking and refreshments, roundtable introductions of everyone in the room will start at 7:30pm – come prepared with your best 30-second summary of who you are, and what you need. Free for TRU members; $13 for non-members in advance ($16 at door). Please use the bright red reservation box

ElizaBeth TaylorMay 13, 2022
Read More
Scroll for more
Tap
Eden Esponisa Makes The Green Room 42 Her Own
Beware Rules of Desire Gives You More Than You Bargain For