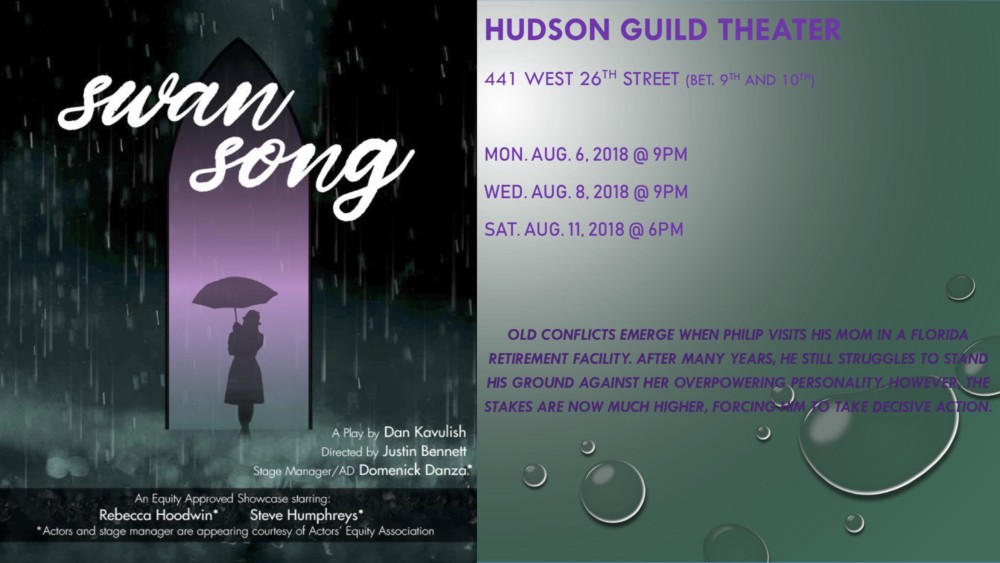 Coming to Grips With the Past in Swan Song

Coming to Grips With the Past in Swan Song

Dementia is a hard fact of life these days. Dan Kavulish’s new play Swan Song deals with a son forced to take care of his ailing mother even though she has refused to accept him in the past.

Philip (Steve Humphreys) has to move his mother (Rebecca Hoodwin) from one facility to another as the money is fading as is her ability to take care of herself. She blames him for her situation and refuses to acknowledge his sexuality. Philip is gay and has distanced himself from her in the past. Now at a Florida retirement facility the two have one more chance to get this mother/ son thing right. Can Philip stand his ground against her overpowering personality? Can his mother accept his lover, his place of residency and who he really is, or is it too late? Even if she can’t can Philip move on in peace once she passes?

Mr Humphreys shows the conflict Philip has lived with for a very long time, as well as the compassion he has for his mother. Ms. Hoodwin shows us Mom at different stages of her life, but sadly she has always been so set in her ways, so that we never really see a kinder, gentler person.

Dan Kavulish allows us some insight to elder care, dementia and the sorrow a child feels not being accepted.

Swan Song is prevalent to today’s audiences, who many have to deal with these issues.

Swan Song is part of the NY SummerFest at The Hudson Theatre Guild, 441 West 26 Street (between 9th and 10th Avenues). You can still see this look at elder care August 11th at 6pm.

Suzanna BowlingMay 12, 2022
Read More
Scroll for more
Tap
Less Than 50% Survives the Curvy Road, But Almost Sinks in the End
Between Panic and Desire Catches You Off Guard