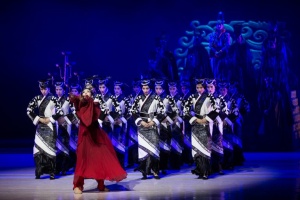 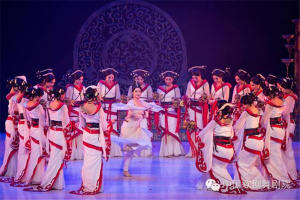 Confucius is a part of CAEG’s Image China cultural exchange initiative, which seeks to introduce traditional and contemporary Chinese performing arts to audiences around the world. Since its inception in 2009, China has presented works at performance venues across the globe, including Lincoln Center in New York, The Kennedy Center in Washington, D.C., and stages throughout Europe and Australia.

Tang Shiyi (Concubine) and Hu Yang (Confucius) are the stars and both are beautiful dancers. They executed the gymnastic qualities to perfection. Both had extended extensions breathing life into this piece.

The performance includes traditional Chinese music, but the problem is that the music is basically one melody played over and over for ninety minutes. The tone never varies and therefore the show and the music seem on a time loop never going anywhere. The choreography has the same problem and there is no variance in which to give Confucius, an arc.

The costumes, were lovely as were the sets. 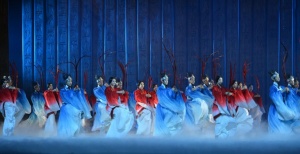 The story focuses on Confucius’ journey through the kingdoms of Zhou Dynasty China, and his quest to instill codes of ethics, honor and benevolence among the empire’s leaders. There is very little conflict.

Though the beliefs and teachings of Confucius, such as the Golden Rule “What you do not wish for yourself, do not do to others,” are admirable and sublime, that does not make for a show that holds one’s attention.

Confucius was the first teacher in China who proposed to make education available to everyone. He believed the common masses lacked the intellect to make decisions for themselves and supported a government led by a virtuous king, who ruled by example and followed ideals of truth and honesty. He emphasized strong family loyalty, respect for elders and ancestor worship. Confucius believed he failed in his effort to inspire China’s leaders