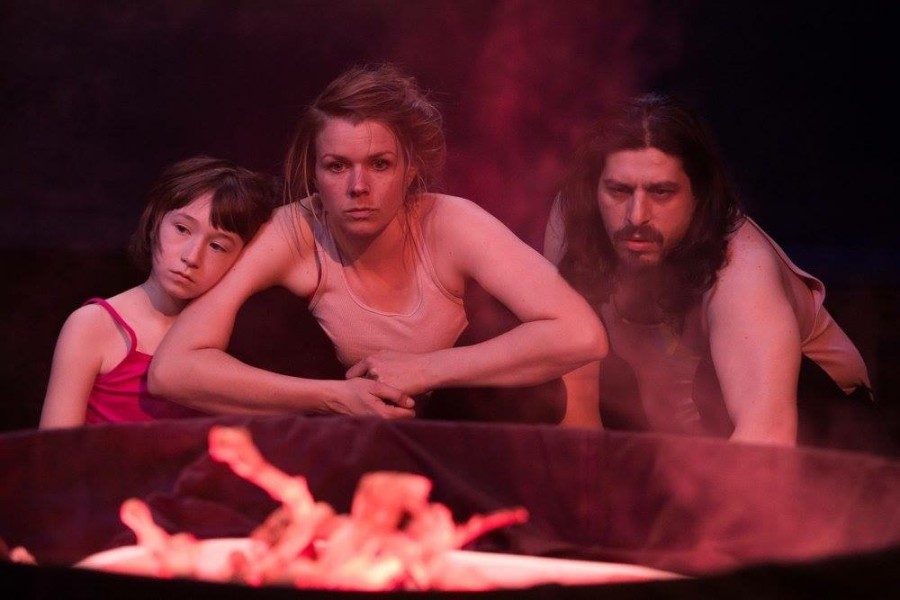 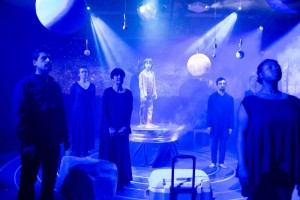 When I was little, I remember watching, with a keen eye, my grandmother cook in the kitchen. There were no measuring cups in view as she would add a dash of this, pinch of that, and a hearty spoonful of something else. Customarily, the end results were almost always culinary delights. However there would, on rare occasions, be an over-peppered or far too salty dish for our tastes. The same can be said for Collaboraction’s new, 20th Anniversary show, Connected.  Both written and directed by Collaboraction’s Artistic Director Anthony Moseley, Connected was derived as an exploration of mankind, technology and the human connection to both. This immersive theatrical experience, part historical docudrama, part family adventure, and part science fiction quest, at times collapsed under the weight of all of its individual pieces. To say this show is a little “out there” would be an accurate description, however, coming into its own space and celebrating turning 20 is quite an accomplishment, so I will forgive the fleeting moments of self-indulgence. Who was perfect at 20? 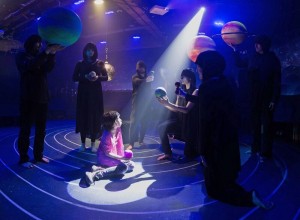 Upon entering the performance space, the audience is seated comfortably around a “camp fire” set, designed by Ashley Woods, in anticipation for the story to commence. As time lines converged, we bore witness to an artistically designed, creation of the galaxy unfolding, with actors whirling and twirling around in a circular formation,  representing  the planets and the solar systems’ inception, just after the Big Bang.  We were informed “time doesn’t move in a straight line” as the actors introduce themselves.  The smallest character, Planet X, also known as the future, was played by scene-stealing youngster, Stella Moseley, adorned in pink.  The remainder of the planets are played by a diverse, multi-cultural cast including Saturn, The Farmer (Antonio Brunetti) Uranus, The Sky (Luis Crespo) Mercury, The Messenger (Justin Michael Dietzel) Neptune, The Sea (Amber Hugee) Jupiter, The Giant (Warren Levon) Mars, The Mother (Mary Mikva) Venus, The Love and Beauty (Annie Prichard) and Earth, The One (Rasika Ranganathan).  The entire cast played multiple roles once the story settled firmly on Earth and the evolution of man, astutely portrayed with clever puppetry, video projections and traditional story-telling. We travel from ancient caveman times to classic Rome in a heartbeat as mankind’s dependence upon one another became essential for their society to proliferate.  Next, we traveled to the 1960’s for a hippy love-in protest sing-a-long, then to a family reunion, where the grandmother raps with her granddaughter about her love for her clan, and then concluded in the not-so-distant future, after Earth’s resources were exhausted by the warmongering of mankind. Remember, I did say this show was a little “out there.” 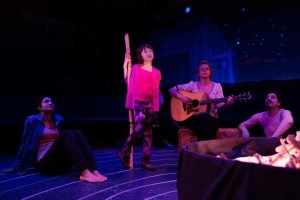 The story then asks the audience to “cradle the new” and blatantly encouraged everyone to take out their cell phones, representing current technology of course,  and insisted we snap selfies with members of the cast and other patrons in the audience. The producers simultaneously shot a live video feed of the audience that that put up instantaneously on their social media site. #justembraceit! The final portion of this segment of Connected was pure audience participation, as we played one of three participatory game options; the Laughing Game, the Music Machine or the Cha cha Slide.  I felt I was at an interplanetary wedding reception, or in this case a 20th anniversary party, as we collectively laughed and shimmed our way through a group rendition of the cha cha slide. Collaboraction is all about collaboration, and this was a courageous fusion of audience with artists. 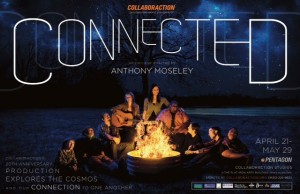 The creative team behind Connected were linked by their talents too. I was awestruck by Joe Burke’s impressive projection design. From intergalactic space travel to the destruction of the world, Burke’s visuals set the ever changing scenes with dynamite visual precision. Lighting designer Erik Barry’s work captivated as well. Costume designer Elsa Hiltner’s work, clearly crafted on a shoestring budget, was sufficiently up to the task and David Woolley’s fight choreography was realistic enough with a 360 degree audience encircling all the action. Rachel Watson’s dinosaur puppet design will, pardon the pun, connect with the kids in the audience.  Matthew Reich also needs to be commended for his sound design. Connected is a production that bonded almost all of the audience’s senses. They appeared to have tossed in everything but “smell-o-vision” but I digress.

Collaboraction was created with the desire to blend stories with artists, community activists and Chicago’s diverse citizens to “create original theatrical experiences that push artistic boundaries.” Connected absolutely continues that hearty tradition. Requiring the audience to be an essential “connected” part of the proceedings set this production apart. I respect and applaud the color blind casting choices and that everyone approached this piece with an unlimited sense of wonder and spirit. This show isn’t going to be everyone’s cup of tea. Paring down some of the story telling elements might help with that. Trying to be all things to all people, there were segment fragments which collapsed under the strain of their own weight. With that said, overall the ambitions Connected #clicks.

Collaboraction’s Connected is now playing at the Flat Iron Arts Building through May 29, 2016 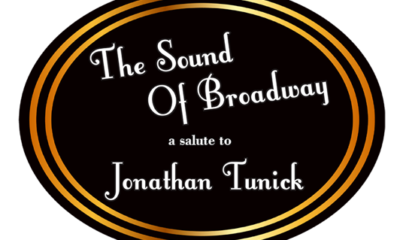