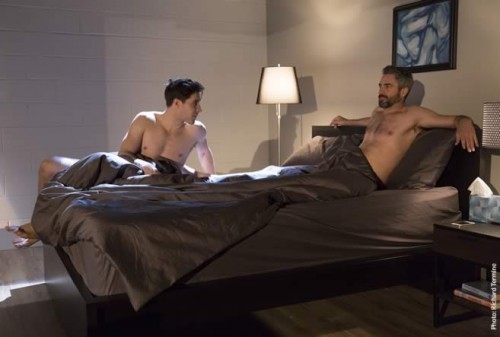 Consent is Definitely Out of The Closet

Consent is Definitely Out of The Closet 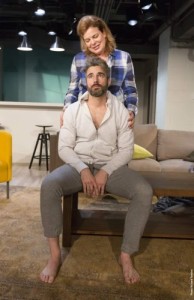 Get ready for a new play that explores sexual boundaries and what constitutes an intimate relationship in the gay world. Consent, is by playwright David Rhodes and is now playing at the Black Box Theatre at The Harold and Miriam Steinberg Center for Theatre. This is not for the audience goer that is at all sexually repressed. 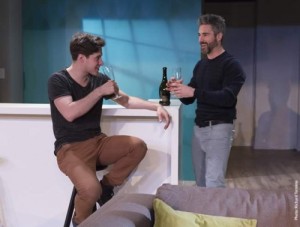 As the play starts Ron Sullivan (Mark McCullough Thomas ), a former NFL player and award-winning architect is in bed with Kurt (Michael Goldstein), a handsome law student. They discuss the top and the bottom of f*%king in  graphic detail using that word in excess. Until Ron’s sister Emily (Catherine Curtin “Orange is the New Black”) is summoned, this borders on gay porn. When his wife Susie (Angela Pierce) shows up with divorce papers Kurt takes the sex two steps forward into rape, bondage, masochism and role-play. When Ron tells his sister what has happened she is shocked and horrified, when she finds out that her brother liked the beating up and rape, but she loves him unconditionally. Desire, exploration, passion, shame and vulnerability all are what is dealt with here. We learn that how Ron and Kurt met was the touching of private parts in a subway. That Ron left his wife and kids to explore and it has over taken his responsibilities, except in the finical department.

Rhodes has based much of the plot on his own coming out experience. Interesting enough it was his wife who allowed Rhodes to explore his inner passions, though in the play his wife is a shrew. “I don’t think I would ever have had the courage to come out if she hadn’t given me permission,” states Rhodes in real life. Rhodes and his wife are still married. Rhodes writing is clean and clear and he definitely has a voice, but the question becomes where are the boundary’s?

Consent: Black Box Theatre at The Harold and Miriam Steinberg Center for Theatre through June 28th,

Suzanna BowlingMay 17, 2022
Read More
Scroll for more
Tap
What I Did Last Summer What a Great Start to a New Season
NYMF: Real Men, A Musical For Guys, And The Women Who Put Up With Them A Commercial Success Waiting to Happen