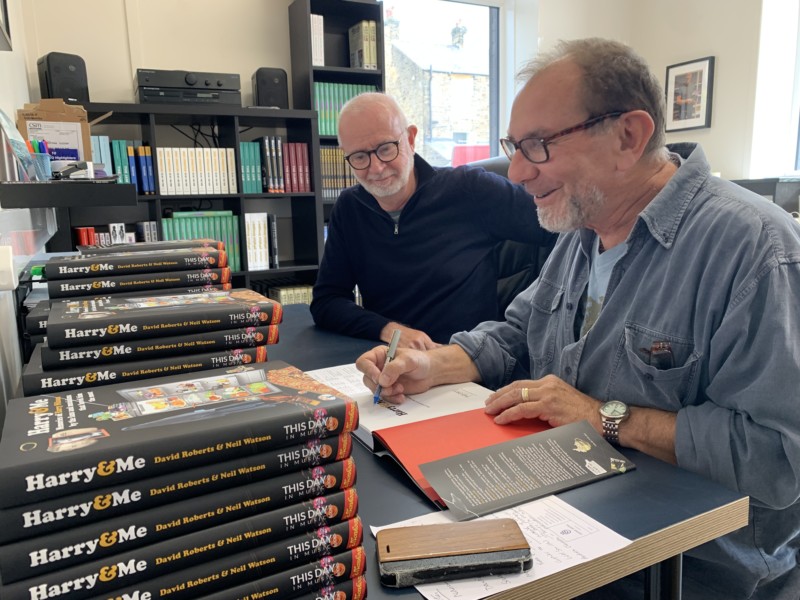 Born of the pandemic, Harry & Me: Memories of Harry Nilsson is a thoroughly enjoyable love letter to legendary singer-songwriter Harry Nilsson.

On the 50th anniversary the enigmatic performer’s seventh album Nilsson Schmilsson, veteran authors David Roberts and Neil Watson recently spoke about the new project by phone from the UK.

Journalist Lee Valentine Smith chatted with the writers about the book, Nilsson’s many fans – and that lucky kitchen appliance on the cover.

An incredible spirit of community runs throughout the project.

David Roberts: Our expectations were that it would be a fun thing to work on, but it exceeded everything because the fan base of Harry Nilsson is just the most amazing bunch of people. We’ve had contributions from literally everyone – from a 93-year-old nun in California to a 16-year-old schoolgirl in England. They’re an amazing bunch. I’ve worked on a few music books before but I don’t think I’ve ever seen a fan base as fascinating as the people who contributed to this one.

It’s not just a standard biography – anyone can do one of those. For this one, you’ve included the real voices of the fans. Of course, some of them are quite famous, including Harry’s old pal Micky Dolenz of The Monkees.

Neil Watson: That’s right. I think for me, the point at which I thought, ‘Oh, now this is really becoming exciting,’ was when I was in Essex, picking up my sister who lives there. I was telling her partner that I’d just started doing a book about Harry Nilsson. I think he did know who Harry was, but he wasn’t a fan. I said to him that he’d worked with loads of people. Then I mentioned Micky Dolenz. At that point, he said, ‘Oh yeah, well he used to live in the town in England where I used to live, Saffron Walden.’ That was a fact I didn’t know. Then I put something on the town’s Facebook page, Saffron Walden – Old and New, I think it was called. ‘Is it true Micky Dolenz used to live there or very nearby?’ I was inundated with people saying, ‘Yeah, we used to see him go on the train down to London.’ ‘He got married in a church that was not far from us.’ Things like that. So that was what initially spurred me on. Micky’s quote was the first celebrity that I had success with it. From then on, other cool people came on board, like Randy Newman and Mark Cohn.

You’ve placed everyone on equal status.

Watson: Exactly. If it was Nilsson’s teacher or someone who was a fan or a well-known musician who’d worked with him, they were all given the same status. I mean, we didn’t get Paul McCartney in the end, though I did try. But if we had gotten him, it would’ve said, ‘Paul McCartney, Musician.’ It worked to have everybody on the same terms – with the common denominator being their love of Harry Nilsson.

Roberts: Neil was already a fan but I really grew to love his music. I found out so much about the man as a comedian, poet and a loving father. He liked a bit of fun. But the friends that he drew to him – it wasn’t just a coincidence that some of his best friends were people like John Lennon and Ringo Starr. Some of the stories are quite riotous. So all of that combined, contributed to a great story.

Roberts: I’m glad you picked up on that because that was our feeling. The publisher said to us, ‘How do we describe it to the designer?’ We said to him, ‘Think Monty Python.’ Because there are, as you see, lots of connections. Harry was friends with various members of the Pythons. I think that is the sense that comes through. There are some hilarious stories. Harry’s own experience of comedy was so formed by Monty Python – but much earlier than that with Laurel and Hardy. There’s a lovely story, actually, where as a fan, young Harry, I don’t quite know how old he was, but I think he was in his teens, managed to get the telephone number of Stan Laurel and rang him up.

Watson: He’s just got this wild and wacky sense of humor which hopefully, we’ve portrayed. Even with the cover.

Yes, tell us about the significance of the refrigerator on the cover.

Watson: We were thinking about what type of cover to do. I thought, my goodness me, right across where I live, in the next house, is a very, very fantastic artist called Alison Stockmarr. I’ve known her for a while. She does these fantastic pieces of art where she cuts out little, tiny things and puts them onto books or record sleeves. They’re just fantastic. When I went and asked if she’d be interested in doing the cover, she said yes, straight away. But she didn’t know anything about him at all. So David and I had a meeting with her and almost straightaway, she got it. She got who Harry Nilsson was, what he stood for and what he was all about. We were talking about the fact that it is going to be coming out, more or less, in time with the 50th anniversary of Harry’s most commercially successful album Nilsson Schmilsson, which came out on the first of November 1971.

Roberts: [The cover is] a black and white picture of Nilsson in a bathrobe standing in front of his fridge. Well, we call it fridge. I think you call it refrigerator.

Watson: Alison said, ‘How about if we get a ‘fridge and use that as a sort of centerpiece for the front cover?’ The next problem was, where do we get one that looks similar to the one that Harry used? But we did find one for sale in a town about 50 miles from where I live. I think the guy wanted 30 or 40 pounds for it. On the day I was due to go pick it up, he’d obviously checked it out to make sure it worked. He phoned me up, just as I was leaving to go get it. ‘Look man, I’m really sorry. I’ve just checked it out and it doesn’t work.’ I said, ‘It doesn’t matter. I still want it.’ So he was thinking it’s his lucky day because he’s selling me a ‘fridge that doesn’t even work, right? I turned up at his house, picked it up and put it in the back of my car. I took it to Alison’s house where she’s got a garage that she’d turned into a makeshift studio. As I took it out of my car, I must’ve taken it out the wrong way and it fell. The door fell backwards and it broke off. So I ended up with this ‘fridge with a door that had fallen off. All the pieces that were inside had fallen out onto the pavement on the street. There was an old couple walking by just at the moment when I said a few expletives as the door had broken off. This poor couple, they were sort of feeling sorry for me, picking up all these pieces off the street and carrying them ‘round to the garage studio. We set it back up but we weren’t able to fix the door back on. So in the picture, actually photographed by Alison’s husband – you can’t see it, thank goodness – but I’m actually crouched down behind the door with my fingers underneath it, holding it in place. That became the photograph that was used for the cover. Then Allison cut out loads of little tiny pictures of things that related to Harry or the songs. So you have Laurel and Hardy and the lime in the coconut. The rug is an homage to his Pussycats album. All these tiny little clues that Allison picked up on, from what we had told her about Harry. I’m delighted with it. For me, it is a real piece of art.

So what became of the ‘fridge? Obviously you preserved it in some sort of shrine to Harry, right?

Watson: Well, we didn’t have the proper space for it, so I’m afraid I had to take it to the rubbish dump. It’s gone to ‘fridge heaven.

Watson: Yeah it lived to tell another tale, didn’t it? If we hadn’t bought it, I suppose the guy who used to own it would’ve just plugged it in one day, realized it didn’t work and taken it to the dump as well. But we got some mileage out of it, that’s for sure.

Harry & Me: Memories of Harry Nilsson – by the fans and musicians that loved him the most is available for pre-order from most major retailers and via This Day In Music Books, www.thisdayinmusicbooks.com. Note: the first 1,000 copies include Harry On Harry, a limited-edition bonus CD featuring rare Harry Nilsson interviews from the ‘60s, ‘70s and ‘80s.

ElizaBeth TaylorDecember 23, 2021
Read More
Scroll for more
Tap
A Live Looney Tunes Musical Show Coming To A Stage Near You
The Glorious Corner