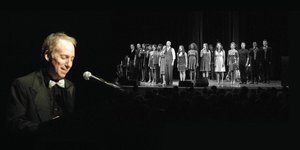 Broadway by the Year© concerts open time capsules to some of the Great White Way’s most memorable seasons, and celebrate the songs, anecdotes, and behind the scenes stories of given years. This Broadway By The Year© concert will feature musicals born on Broadway in 1965 including Do I Hear a Waltz?, Flora, the Red Menace, The Roar of the Greasepaint, the Smell of the Crowd, On a Clear Day You Can See Forever, Man of La Mancha, and moreand musicals from 1978 including On the Twentieth Century, Ain’t Misbehavin’, Working, Best Little Whorehouse in Texas, Eubie!, Ballroom, and more.

The cast of Broadway By The Year©: Broadway Musicals of 1965 and 1978 includes: Corbin Bleu (Kiss Me Kate), Betsy Wolfe (Waitress), Ethan Slater (SpongeBob Squarepants), Danny Gardner (Dames At Sea), Nicole Henry (International Jazz Performer),Douglas Ladnier (Jekyll & Hyde), and Rick Faugno (Kiss Me Kate). More guest stars will be announced in the coming weeks. “I am over the moon with the fabulous cast that we’ve assembled for this Broadway by the Year© evening,” said Scott Siegel. “The BBTY Dance troupe, choreographed by and starring Danny Gardner will be back plus this concert will highlight dance with the additions of sensational song and dance men Corbin Bleu and Rick Faungo. Audiences are in for a treat.”

Broadway By the Year unique, critically acclaimed series created, written, hosted, and directed by Scott Siegel is peppered with history-making events. Broadway by the Year introduced Stephanie J. Block to the New York City theater audience. And it was Broadway by the Year that starred Jessie Mueller in her first concert appearance in New York after she was first seen on Broadway in On a Clear Day You Can See Forever. Broadway by the Yearpioneered the use of dance in a one-night only concert format and they have and continue to highlight the Broadway voice by introducing unplugged performances, using no microphones.

For tickets and information, please visit www.thetownhall.org or call 800-982-2787. The Broadway By The Year© concert series is part of The Town Hall’s presenting season.