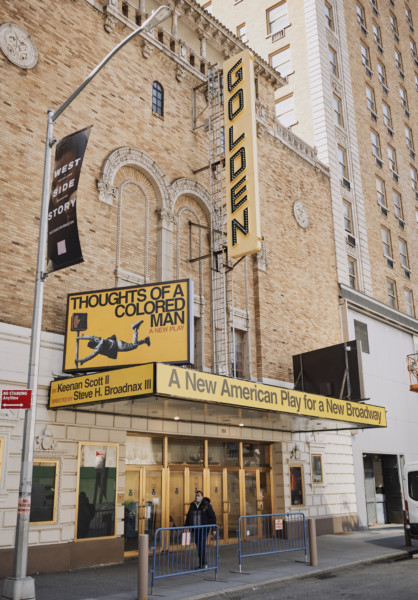 Signaling a genuine moment of optimism about the future return of theater to New York City, this morning, the marquee for Thoughts of a Colored Man was installed at the Golden Theatre making it the first new show to take up residence at a Broadway theater since the pandemic forced all plays and musicals to stop performances on March 12, 2020.

Thoughts of a Colored Man will mark the Broadway debuts of both Scott and Broadnax. Scott’s new play The Migration LP is in development at New York Stage & Film and Broadnax most recently directed Katori Hall’s new play The Hot Wing King at Signature Theatre.

Over the course of a single day in the pulsing heart of Brooklyn, the hopes, sorrows, fears, and joys of seven men reverberate far beyond the barbershops and basketball courts of their community. Vulnerable and vibrant, raw and alive — these are the Thoughts of a Color Man.

A powerful theatrical testament by Keenan Scott II, Thoughts of a Color Man weaves spoken word, slam poetry, and rhythm into a mosaic of the inner lives of Black men and heralds the arrival of an essential new voice to the American theater.

Thoughts of a Colored Man had its critically acclaimed world premiere at Syracuse Stage under the artistic direction of Robert Hupp in fall of 2019 with a subsequent run later that year at Baltimore Center Stage (Stephanie Ybarra, Artistic Director).

Casting, first preview, opening night, and ticket information for Thoughts of a Colored Man will be announced in the coming weeks.