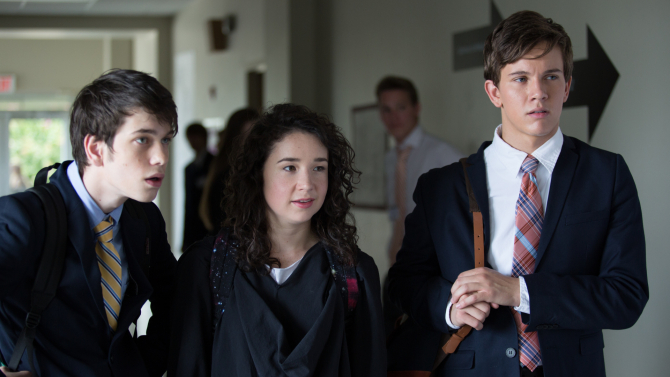 An exclusive sneak peek of the film “Speech & Debate” based on Tony-Award winner Stephen Karam’s hit play, along with a panel with surprise guests from the movie is happening at 12:00 PM – 12:50 PM on January 28. This is an exclusive musical preview only at BroadwayCon. Moderated by Darren Criss who has a cameo role in the film, the panel will include screenwriter Stephen Karam, film actors Sarah Steele, Liam James, Austin P. McKenzie, and Roger Bart, and producer Tom Rice.

Based on the critically acclaimed off-Broadway hit, “Speech & Debate” follows three teenagers brought together by a series of mishaps. Frustrated by the hypocrisy they see in their parents, teachers, and the entire school board, the unlikely trio set out to find a common truth and make their voices heard as they revive a defunct school club and take on the world. Blogging, blackmail, and Broadway belting drive the trio’s bond in this wickedly funny teen comedy. The film also includes Lin Manuel Miranda and Skylar Astin.

WriterJanuary 13, 2022
Read More
Scroll for more
Tap
Billy Porter Will Cut The Ribbon For A.R.T./NEW YORK THEATRES
The Golden Globes A Guide of Whats Up and What to Expect