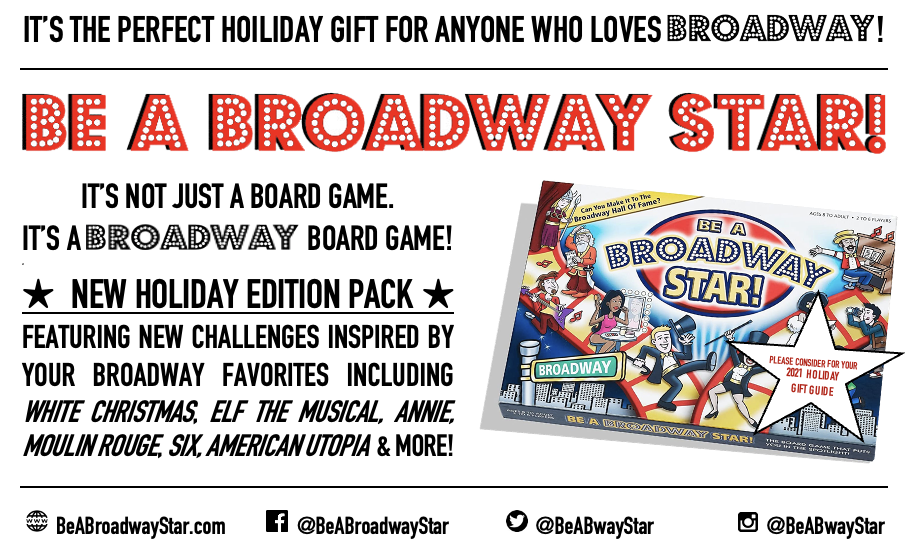 With the lights of Broadway now shining brightly again, we’ve got the perfect holiday gift for Broadway fans of all ages: Be a Broadway Star!, available from Amazon.com for $49.99. And now, just in time for the holiday season, the game’s creator, Tony Award®-winning producer, Ken Davenport (Once On This Island, Godspell), has announced the release of a free, 30-page expansion pack, including 18 pages of holiday show questions, now available for digital download.

Be a Broadway Star! isn’t your typical board game. This is a Broadway board game starring YOU in the spotlight. Roll the dice, move through the board and pick cards that challenge them to sing, dance, or act out lines from their favorite Broadway shows. Start out in acting school and work your way up to the top, buying pictures and resumes, earning an Equity card, getting an agent and publicist, going to auditions, getting cast in shows, and maybe even winning a Tony Award. The star who accumulates the most fans along the way to the Broadway Hall of Fame wins the game. Be a Broadway Star! is the board game for the Broadway Bound and Broadway fans of all ages.