Countdown To Christmas: Reading One of Our Favorite Past Times

Countdown To Christmas: Reading One of Our Favorite Past Times

We love to read and books are a terrific gift. Here are favorites. 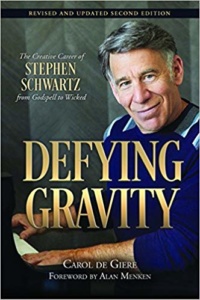 Defying Gravity: The Creative Career of Stephen Schwartz, from Godspell to Wicked: This is Carol De Giere’s revised and updated second edition of Defying Gravity,that takes readers into the creative world of Broadway and film composer Stephen Schwartz, from writing Godspell’s score at age 23 through the making of the megahit Wicked. The book gives great details and insights into Schwartz’s creativity and passion for musical theatre. The previous edition ended with the creation of “Wicked”, but the second edition goes even farther since “Wicked” has become a worldwide phenomenon There is a fascinating story about how Wicked needed to be translated into other languages and cultures where the movie “The Wizard of Oz” is not a part of the cultural landscape. The new book goes into Schwartz’s current writing, including his adaption of his animated film “Prince of Egypt” into a full blown stage musical. The book also includes a series of “Creativity Notes” with insights about artistic life, and more than 200 photographs and illustrations. $14.26 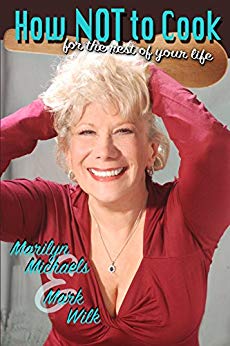 How Not To Cook, for the Rest of Your Life: Marilyn Michaels and Mark Wilk’s book is an ANTI-cookbook. Equals parts biography, self-help, and scrimp-n’-save philosophy, this laugh-out-loud rant, served up by America’s premier comedienne/impressionist, is a no holds barred empowerment-driven read. 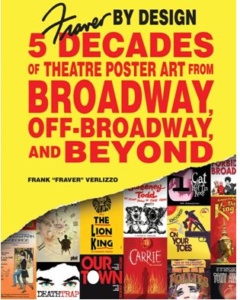 FRAVER BY DESIGN: Five Decades of Theatre Post Art from Broadway, Off-Broadway, and Beyond by Frank ‘Fraver’ Verlizzo. The Drama Desk Award-winning artwork of Frank ‘Fraver’ Verlizzo includes over 250 of his theatre poster designs from Broadway, Off-Broadway, regional and international productions. Graphic designer Frank Verlizzo, known professionally as FRAVER, takes you behind the scenes for a glimpse into the world of theatrical advertising and poster design.  He created the logo designs for hundreds of theatrical productions from The Lion King to Agatha Christie’s The Mousetrap.  Over 20 of Fraver’s poster designs for the works of theatre legend Stephen Sondheim are spotlighted including: Sweeney Todd, Sunday in the Park with George, Getting Away With Murder, and the landmark 2002 Sondheim Celebration. His posters encompass those created for Rodgers & Hammerstein, The Kennedy Center, and New York City Center’s Encores! series. Fraver by Design also features an additional 40 unpublished poster sketches never before seen for some of Broadway’s favorite shows and22 commentaries on various Fraver posters by such theatre glitterati as Bernadette Peters, Judy Kaye, Ted Chapin, Manny Azenberg, Gerard Alessandrini, Dean Pitchford, Liz Callaway, and Jack Viertel plus a foreword by legendary theatrical poster designer, David Edward Byrd (Follies, Godspell, Jesus Christ Superstar). $18.17

Suzanna BowlingOctober 18, 2022
Read More
Scroll for more
Tap
Countdown To Christmas: Breath Freely
How to Choose the Best Autoradio in the Market