Countdown To Christmas: The Quintessential Voice and a Labor of Love

Countdown To Christmas: The Quintessential Voice and a Labor of Love 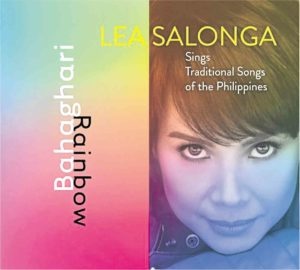 Now appearing in Once This Island singer Lea Solanga walked into a studio in Manila with a list of songs. The songs represented the Philippines’ three cultural regions, many languages and were selected from a lifetime’s worth of research by preeminent musician, scholar, and producer Ryan Caybyab. “Ili Ili” and several others were songs sung to Lea by her mother. With six different arrangers, 16 songs in different Filipino languages, including Tagalog, Bisaya, Ilonggo, Bicolano, Capampangan and Ilocano, varied performers, and arrangements that revolve around piano, guitar, gentle percussion, vibes, flute and in cooperation with the Global Language Project (GLP), Bahaghari “Rainbow” is a must have CD for those who love music and diversity. Salonga’s brother, Gerard also performs on the album.

Her powerful emotional ties and artful interpretation shine on Bahaghari “Rainbow”, which was recorded in four days.

GLP Music who produced the album was founded by Angela Jackson and Rex Niswander, the label aims to deepen connections to language learning and preservation via compelling music. Salonga sings in several endangered languages on Bahaghari and this is a way of preserving them.

Lea sings with the crystalline clarity, delivering an emotively that is abundantly clear. These melodies spring to life a culture we rarely see.

We leave you with our favorite track.