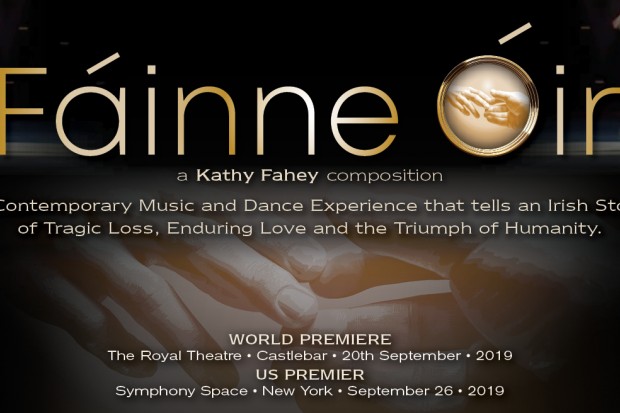 A cauldron of creativity, Ireland provides a natural opportunity for a creative individual to brew a mixed arts concept — and that again has happened. Blending music, dance — through “Lord of The Dance” star Ciara Sexton’s choreography — and the creative stage design of fine artist Padraig McCaul, the multi-media experience of “Fainne Oir” will made its American debut in Symphony Space on September 26, 2019.  Since creator/composer Kathy Fahey is County Mayo based, she could not only draw on local talents, but it also meant she could employ the beauty of its pastoral landscape. All of that — and the dark history of the region — was lent to the passion behind this work.

Paraphrasing the detailed notes, “This show depicts the story of an Irish family during the Famine Years of 1845-1848. As parents, children, friends and neighbors work together to survive off the sparse land through the life-giving potato crop, the Potato Famine devastates the island and the West Country where Mayo is situated. Parents Sean and Maire O’Malley and their five daughters — Saoirse, Mary, Ann, Norah and Brid — rise dily to toil in the fields. Their oldest daughter, Saoirse, and farm hand Diarmuid, works late into the evenings so the two can be near to each other for as long as possible. When the destructive blight hits, the O’Malley’s small holding, located in a rural part of County Mayo, is badly affected.”

Paraphrasing this historical note from Wikipedia, Ireland grew to over eight million people prior to the Irish Great Famine of 1845–47. People depended on the potato crop for sustenance so disaster struck in August 1845, when a killer fungus (later diagnosed as Phytophthora infestans) started destroying the crop. Widespread famine struck, about a million people died and a further million left the country. The catastrophe was particularly bad in County Mayo, where nearly 90% of the people depended on the potato as their staple. By 1848, Mayo was a county of total misery and despair, with any attempts at alleviating measures in complete disarray.

“Through music and dance, we watch as Diarmuid makes a promise to Saoirse that he will protect and love her forever. However, nothing can undo the blight’s damage and soon, without their sustenance, people go hungry and starve. Saoirse’s mum succumbs and dies at of 37; the O’Malleys are heartbroken. Saoirse’s father, a farmer with just one cow and donkey remaining, sell a precious gold wedding ring — the Fainne Oir —  in order to buy Saoirse a one-way ticket to America. Despite her protestations, her dad insists the family can manage.”

Like so many true Irish diaspora stories, Saoirse becomes a symbol for countless survival tales. Diaspora specialist Mike Hannon decided to produce “Fainne Oir” but it “became more solidly a reality once Kathy began working on after being commissioned in 2017. I felt there had be some kind of celebration of the Irish people’s survival during such a dark time. I felt it would be inspirational for so many today.”

We watch the heartbroken O’Malley family and Diarmuid wave Saoirse off at the pier as she boards the ship to America — wondering if their love will make its way across the vast ocean. As the outline further explicates, “In Part 2, Saoirse must forge a successful future in a land of promise, away from her famine-ridden homeland. Fortunately, the 18-year old finds immediate employment, working as the Johnson family’s maid – who make her feel welcome – especially son Samuel. While her heart remains in Ireland, Samuel shows her around New York, nonetheless, she sends loving letters home to her family, looking forward to when they all can be together. New tragedy strikes with her father’s death. In Ireland, Diarmuid stands by his promise to love and protect Saoirse— and care for the now orphaned O’Malley sisters. As the worst of the famine passes, there is hope for the future and plans are made to bring the remaining O’Malleys to America; Samuel wants to help but Diarmuid also longs to be with his true love. Money changes hands, tickets are bought and the magical Fainne Oir once more appears, and ultimately the story ends on a soaring note of love and happiness.”

Fahey ultimately became inspired to write the storyline for Fainne Oir. Thinking of the rise and fall of the orchestral music she was composing, she commented: “From the start the idea was for the Irish Famine to provide a source for the theme. While this period of Irish history is acknowledged and recognized the world over, it’s rarely spoken about, and the many success stories that followed from it.”

As Fahey explained, “I refer here to the diaspora and particularly the many successive generations of Irish Americans, Irish in Britain and Australia and throughout the world, who left our shores to survive and make it, who sent money back home and kept their familes alive. They did Ireland so proud through their hard work, dedication and ambition Because of that, we have hundreds of thousands of inspirational Irish people and leaders abroad, who we can be so proud of today.”

The Mayo-based musical cognoscenti added, “In creating this story around the Famine, I especially liked the idea that it was old Ireland. of course, while it was a profoundly sad time for people due to the starvation, death, and tragedy of it all, there were also happy elements to it. Families worked so closely together as unified groups, to support and protect each other and simply, to stay alive. Community was very important.”

As to the naming of the project “Fainne Oir,” Fahey recalled, “In the back of my mind, I thought that the musical composition and storyline needed to be about more than a love story. Something needed to bind it together. It had to be symbolic, something that would appear time and time again and would stand the test of time through the generations — and that is when the idea of Fainne Oir came to be. Throughout this story, through the sacrifices made the permanency of this valuable golden ring, literally becomes the ring that saved the lives of an entire family and brought them around the world. Without a Fainne Oir, this famine-stricken clan wouldn’t have survived.”

Composer/co-producer Fahey has worked with choirs since she was 12, both teaching and as an accompanist at local churches and weddings. At 18, she began teaching piano and soon was training her first adult choir. Now she’s directing of several award-winning choirs including: Castlebar Gospel Choir, Vocalessence Ladies Choir, Ev’ry Voice Community Choir, The Troubadours, Vox Fusion, Belcarra Local Parish Choir and Children’s Choir.  In 2017, Fahey was appointed Mayo Concert Orchestra conductor. Under her direction, her choral groups have performed in such prestigious places as Dublin Castle, the American Ambassador’s Residence, National Concert Hall, Christ Church Cathedral the Late Late Toy Show. Given all her history, it’s fitting that she turned to the Mayo Concert Orchestra to be the first to perform this new work.

In co-producing Fainne Oir’s world premiere in Ireland, Hannon also launched  the County Mayo Foundation, a US registered not for profit to assist Mayo-based charities and organizations looking for support from the diaspora. Previously, he brought other Irish shows to NYC and Boston including “An evening with Pete St John” at Symphony Space and John B Keane’s “Moll” at New York’s Town Hall. Hannon has worked with charities both in Ireland and in the UK. Professionally accountant, he spent much of his career fundraising for charities in Ireland and the UK and worked on many capital campaigns, notably for Childline. In the UK, he ran events such as a gala at The Dorchester in London patronized by the late Princess Diana and a reception at No 10 Downing Street, hosted by John Major.

Also key to this new production is choreographer Ciara Sexton, a veteran from the original international Irish multi media production — Riverdance. Sexton professionally began her dance career in the lead role of Morrighan in Michael Flatley’s “Lord of the Dance” — his production after his landmark Riverdance. When he returned on a world tour in 2011, she appeared alongside him. Sexton also does choreography regularly for her hometown troupe, Celtic Feet, touring with them in 2012 in their production of “Excalibur – A Celtic Rock Opera. She also appeared with Flatley in the 3D film version of “Lord of the Dance.”

Another unique element of “Fainne Oir” is the addition of noted Dublin-born painter Padraig McCaul who now lives and works on Achill Island, off the Mayo coast. Widely collected internationally and at home, his work is in many prestigious collections, including London’s Hottinger Art Collection, the President’s office of Notre Dame University, USA,  the Haddington Hotel, Dun Laoghaire and the Tannery Restaurant in Dungarvan. He has had sell out exhibitions in Ireland with Dublin’s Doorway Gallery and Fremantle, Australia’s Kidogo Arthouse. A collection of new paintings will be used as the stage backdrops for Fáinne Óir. Describing his symbiotic relationship with his adopted home place, McCaul noted,”It has everything a landscape artist would want — the sea, mountains, the rolling bog, sky and the light that changes every hour of the day. There is no reason to go beyond it; there is so much here to inspire painting.’’

Debuting early September in Mayo, co-producer Fahey and Hannon thankfully chose New York City as their next stop — but only on one night.