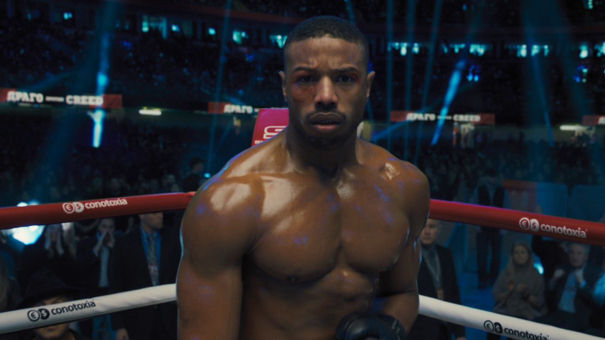 Most boxing films are pretty formulaic — and this one is no different — but it does have an extra special punch hitting home since it’s the second film in the “Rocky” reboot. Again, the “Creed” series gives new life to Sylvester Stallone’s “Rocky” series, one that had been on a respirator until director Ryan Coogler cast Michael B. Jordan to play Adonis Creed in 2015’s “Creed.”

Jordan’s skill at being both buff and vulnerable once propels this film as it did in the first Creed saga. Once again, the illegitimate son of the late heavyweight champion Apollo Creed — who had been defeated by Rocky (Stallone) in original film from which the whole series was launched — comes back after a crushing defeat to victory. That may seem like a spoiler but it’s not that Creed wins again which drives the film; it’s how he copes with his inner demons, doubts and believed inadequacies that makes his challenge all the more intriguing and daunting.

This time, he’s up against the son of Ivan Drago (Dolph Lundgren), the Russian boxer who had killed Apollo in the ring three decades earlier. The young, undefeated heavyweight contender Viktor Drago (Florian “Big Nasty” Munteanu) brutally beats Creed in their first bout. He then gains strength and confidence thanks to Rocky’s coaching insights — revived after Rocky realizes he failed his protege initially having backed off from helping Creed prep for the earlier challenge.

Though there’s lots of emotional entanglements expressed throughout between all the major players, it’s their

fight they engage in that makes the film. Though there could be less contemplative moments which showed expressions of inner doubt several times between the first fight and second, the movie generally succeeds.

How subsequent directors through the course of this franchise will tackle the challenge of offering something more than just man versus inner beast or just a simulation of a boxing documentary remains to be seen.