CSC Macbeth The Play is the Thing…..Not 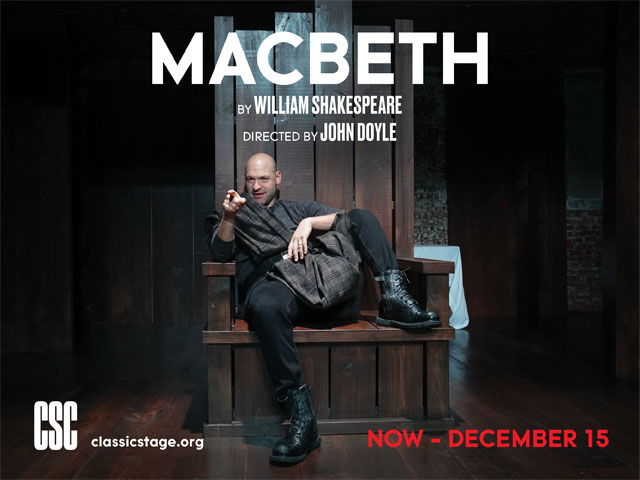 CSC Macbeth The Play is the Thing…..Not

If you d0 not know the story of Shakespeare’s Macbeth, you would be so confused after seeing John Doyle’s version at Classic Stage Company. I can state this for a fact, as my guest had never read or seen the play performed and when we left the theatre, he bluntly asked me what had just happened. Shakespeare is confusing enough, but when men’s roles or vise versa are played by the opposite sex, are killed and jump back up, as if nothing happened, it is hard to follow. There are over 30 cast members in the original. In CSC production 9. Thankfully I had just reviewed Scotland, PA, so the show was fresh in my mind. The actors run in and out the doors and inhabit the entire space of the theatre, including the bleachers, speaking in full voice about the incoming doom and gloom. With that 1hour and 40 minutes, is still not short enough.

For me the best part of Macbeth is the witches. In the original, the play opens amid thunder and lightning, and the three witches decide that their next meeting will be with Macbeth. At CSC the witches are the entire company minus Macbeth (Corey Stoll) and if you did not know this was based on witches and prophecies, it would be very hard to get that drift until much later.

These prophecies set into motion what happens. Macbeth, is told he will be king. His best friend Banquo (Erik Lochtefeld) is told he will father a line of kings, though he himself will not be one. The king Duncan (Mary Beth Peil) states Macbeth will be Thane of Cawdor. The first prophecy is fulfilled, and Macbeth, harbors ambitions of becoming king. His wife, Lady Macbeth (Nadia Bowers), wishes him to murder Duncan so he may be king. She challenges his manhood and successfully persuades him to kill the king that very night.

Like most of Shakespeare’s tragedies, the play is over when most everybody dies a gruesome death.

Corey Stoll and Nadia Bowers seem like they are in a different play, which is much better than the one we are seeing. They manage to pull out some intensity, that seems layered and well thought out. The rest of the cast are all well trained actors, which include Barzin Akhavan, N’Jameh Camara, Raffi Barsoumian, Barbara Walsh and newcomer Antonio Michael Woodard, but when dressed in drab brown by Ann Hould-Ward, with the women in pants and dresses, being called him or sir, it is just confusing. I did get the nod to off with the monarchy, with the shedding of tartan cloth.

They say the play is the thing, but not when your audience is hasn’t a clue at what it is saying.

Suzanna BowlingJune 23, 2022
Read More
Scroll for more
Tap
Ominous Men True To It’s Title
He Says: The Sound Inside is Quietly More Powerful Than the Loud and Frantic Rose Tattoo