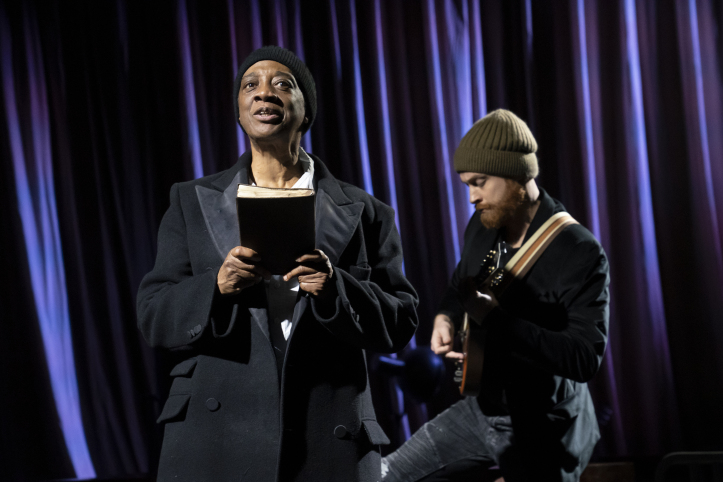 Silence slowly overtakes the Classic Stage Company‘s auditorium as we are asked to tune in to the setup and what is about to happen. We are all here for the two play gothic horror afternoon remix of Frankenstein and Dracula, but sadly, on arrival, we hear that this afternoon’s performance of Dracula (the one both my companion and I were most excited to see) has been canceled due to an illness in the cast. But on we forge, hoping for salvation from our disappointment. Strumming and stirring us into a hypnotic gaze, the recreation and resurrection of Frankenstein, as written by Tristan Bernays (Boudica; The Bread & The Beer) starts to take shape. It’s a bare bones and guts staging, courtesy of set designer John Doyle (CSC’s Pacific Overtures), with hand manipulated lighting by Adam Honoré (CSC’s Carmen Jones), a concise sound design by Leon Rotherberg (Broadway’s The Waverly Gallery), and simple symbolic costuming by Toni-Leslie James (Broadway’s Come From Away), and as the monster creation reclines onto the table waiting for the shock that will bring it to life, we do the same.

It’s a wildly condensed version, but my recollection of the novel by Mary Shelley is weak at best, so there are no complaints here regarding its 80 minutes length. As directed with an intricate insistence by Timothy Douglas (Yale Rep’s Radio Golf), the idea of the story of the Creature/Victor Frankenstein being played by one actor, an engaging and physically empowered Stephanie Berry (Daryl Roth Theatre’s Gloria: A Life), excites and intrigues. Accompanied by the musical Rob Morrison (Off-Broadway’s Avenue Q) wearing a number of different hats, scarves, and glasses, the music and the structure enlightens, expanding the well-know tale through folkie original music he created. He finds the melodic backdrop within the simplest of structures, mimicking birds and arranging props to facilitate the journey. It doesn’t always facilitate an understanding of the metaphoric and the symbolic nuances of the text, but it adds a layer of theatricality that is charming and enjoyable.

It starts out with wordless intensity, but unfortunately, quickly stalls inside its repetition. The enlightenment of the creature circles around and around the pots of food and the fire, showing us an evolution without inspiration. “This better move forward soon”, I nervously pondered, or I’ll start screaming and grunting like the Creature until the candle burns out. They say he’s a fast learner, this creature embodied heavily by Berry, but the lesson in patience goes on and on far too long, tediously dulling any hoped-for momentum with the circling. When the text is finally spoken out loud and the words, thanks to the help of some kind audience members, Shelley’s famous gothic story starts to float out, and we hesitantly reengage, praying that the exercise of educating the Creature was just a overly wrought stylization, and not an overarching theme.

The timorous engagement with the old blind man musician, lovingly portrayed by the very game Morrison makes us believe that pleasure in the tale has not been robbed. And for many a moment, the creativity of the telling is well carved out of the clay given. “I need me love” the Creature cries, and we understand and concur. The retelling of Frankenstein is unique and well presented, although the folkie music sometimes clashes with the text and the tone of the tale. It works, mostly, in spite of itself, stumbling and then righting itself just enough to not lose us completely. Maybe it was that Kate Hamill’s feminist Dracula was canceled leaving me wanting of a more bloody good time that my mood groaned like the confused Creature eating lettuce. It’s hard to know, but I went in hopeful and left somewhat disappointed with the attempt. The energy for a gothic afternoon had lost its dark excitement, so I went home in need of something else. Luckily for me, streaming in, there is a new 3-episode ‘Dracula‘ on Netflix from the creators of ‘Sherlock‘ that filled the half empty void quite magnificently. So all was not lost, because, like the Count says, “blood is everything you need…only in blood do we find the truth.”

Suzanna BowlingJanuary 18, 2023
Read More
Scroll for more
Tap
Beware Rules of Desire Gives You More Than You Bargain For
Dana H. Speaks Out at the Vineyard, Recorded and On Point