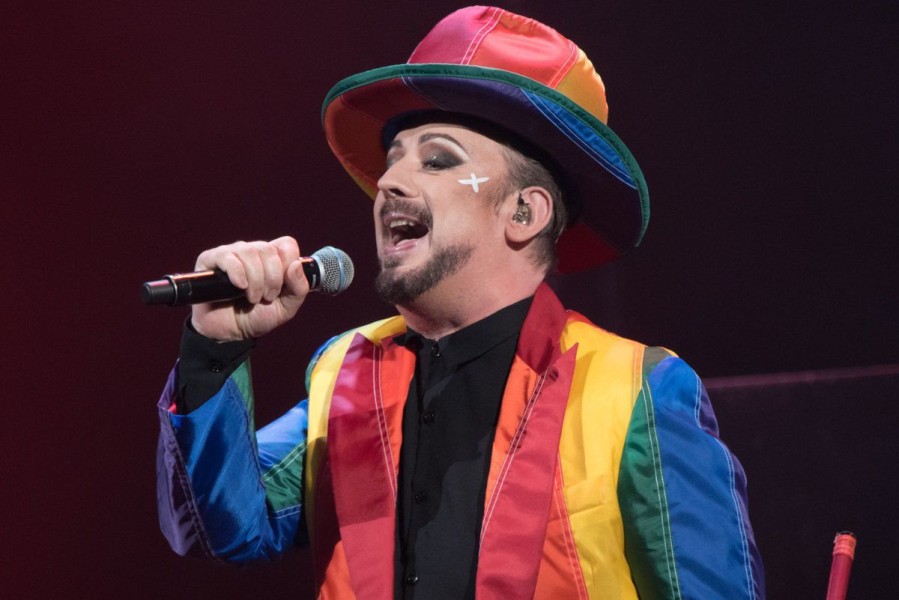 Culture Club – The Boy Is Back

Culture Club – The Boy Is Back 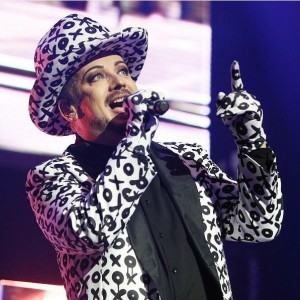 I am happy to report the 1980’s are alive and doing quite well, thank you. Chicagoland’s Summer of 2016 is playing host to tours from Cyndi Lauper, Duran Duran, Berlin, The Go-Go’s and the internationally renowned, Culture Club. Yes, Boy George and his bandmates are back, bringing those amazing, synth pop standard’s to a new generation. Although glancing quickly around the near sold-out Chicago Theatre audience, the generation in attendance was most definitely the MTV formative years,  for which I am a card carrying member. As a brief reminder to the history of Culture Club, flamboyant front man George Alan O’Dowd, drummer Jon Moss, guitarist and keyboardist Roy Hay and bass guitarist Mikey Craig are the quartet who originated in London, England, then quickly segued to define the sound and the look of popular music of the early 1980’s. 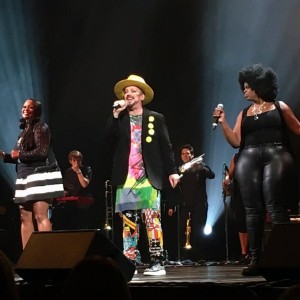 Culture Club will be forever linked with leading the second British Invasion on the pop charts. Fusing their distinctive sound; a mixture of synth pop, Jamaican reggae, and a powerful blue-eyed soulful balladeer, as front man.  This new wave group also became globally famous, due in no small part to the creation and development of MTV, back when the channel actually played music videos in regular rotation. “I want my MTV!” commercials ran around the clock, with George’s likeness center stage.  The group produced 5 studio albums including 1982’s Kissing to Be Clever, certified triple platinum 1983’s Colour by Numbers, and 1986’s From Luxury to Heartache, 10 compilation albums, 3 box sets and 20 regular singles. They were even awarded the prestigious 1984 Grammy Award for Best New Artist. Regrettably, drugs and infighting lead to the band going their separate ways for years. Fast forward to 2016 and the band has reunited for the first time in over a decade to tour the world. Joined by nine additional musicians, including a sax player, trombonist and trumpeter, a trio of lovely and talented back up singers and additional guitarists, Culture Club blew through the Windy City Friday evening, much to the delight of their loyal legion of fans. 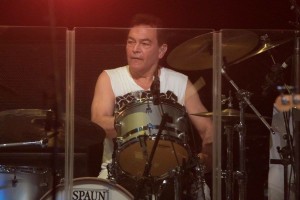 Their 20 song set began with a thunderous version of “Church of the Poison Mind.” This song may be from 1983, but it was just as fantastic to hear now as it was then. George sounded a little hoarse, but his trinity of back up singers helped to fill in any of the rough edges. At song’s end he quipped the night would be filled with “something old, something new, something borrowed and a lot of blue.” It is no secret Boy wrote most of his songs about his well document and tumultuous relationship with drummer, Jon Moss.  Who cannot relate to a song about unrequited love? After a quick spin though “It’s a Miracle,” O’Dowd surveyed the audience and commented, “This is a nice turn out” to a nearly sold-out Chicago Theatre crowd. “We are right in the thick of it America” O’Dowd teased before the band blasted though “I’ll Tumble 4 Ya,” 1986’s “Move Away,” “Human Zoo,” and the Bread cover “Everything I Own.”  It would not be a Culture Club show without discussing the band’s look.  While Jon, Mikey and Roy all chose versions of basic black and white stage costuming, Boy George embraced every color of the rainbow, quite literally. He was a human walking Pride Flag. Rainbow trousers, jacket, walking stick and derby hat to match. It will never be said the Boy doesn’t like to stand out. “Black Money” featuring a lengthy instrumental interlude concluded the first set, allowing Boy time to change outfits offstage. 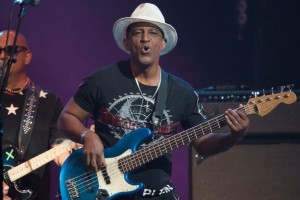 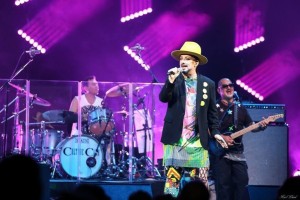 Emerging next with a bright yellow hat, black jacket adorned with dayglow yellow buttons, layered over a multi-colored kimono shirt, the band entertained with Time (Clock of the Heart), a song that has the distinction of being included on the Rock and Roll Hall of Fame’s list of the 500 greatest songs that shaped rock and roll. Chatting with a few members of the audience in the front row, a rambunctious woman shouted, “I am a psycho-crazy bitch who loves you.” Takes one to know one, I guess. The band performed “Like I Used To,” “Different Man” and  “Miss Me Blind” before George returned to sharing short stories with the audience. He credits Sly Stallone as a “musical hero” and the leader of a “multi-cultural club.” He found he could personally relate to Stallone’s infamous quote  “I have many regrets, but I just can’t think of one.” Singing on a stage swathed in soft pink and turquoise lighting, George entertainment with one of his few solo hits featured on the night’s set list, the title track to the Oscar nominated film, “The Crying Game.”  Reflective upon the song’s conclusion, George shared, “you have to make a choice to get smarter.” Whether he was discussing politics, relationships, or the world in general would be left up to the concert goer to decide for themselves. 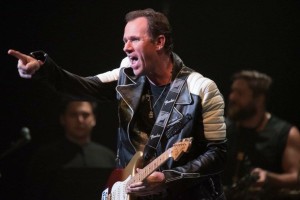 Before starting the song that began their renowned career, 1982’s “Do You Really Want to Hurt Me?” George articulated to the audience “It was genius. The record company released our first single with just a white sleeve. People got to make up their own minds about the music.” Unheard of in today’s world of pre-packaged, Disney Pop-Tarts. Many people even thought George was an African American singer, just from listening to his soulful vocal range, before the band’s first video was ever released.  Defying convention from the very beginning, I recalled their acceptance speech from the Grammy Awards as George observed, remarkably off the cuff, “Thank you America, you’ve got taste, style and you know a good drag queen when you see one.”  After a subtle version of the 1983 song “Victims” and “More Than Silence,” Boy George discussed his personal song writing process. “When you are 21 writing these songs, you don’t know what is what.  When you are 55, you really don’t know”  to the howls of cheeky laugher from both the artist and the audience.  Finishing with 1984’s “The War Song” it was time for a final costume change of the night. 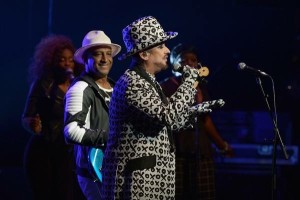 Back in black and white, with hundred’s of little X’s and O’s adorned on his jacket, trousers, hat and coordinating gloves, it was time for “Runaway Train” and the T. Rex cover, “Bang a Gong (Get It On). It is still astonishing to me that Culture Club was the first band since the Beatles to achieve three top 10 hits from their debut album on the Billboard chart. No small feat. They wrapped their show with the global #1 hit, “Karma Chameleon.” Obviously about George and Jon’s relationship, the audience sang “You string along, you string along” in unison with the band. “Loving would be easy if your colors were like my dream. Red, gold and green. Red, gold and green.”  Culture Club brought out all their colors for a Chi-town musical walk down memory lane. Sustaining his ever evolving androgynous style and biting wit, Boy George and this (Culture) Club are still very much open for business. The business of making music. 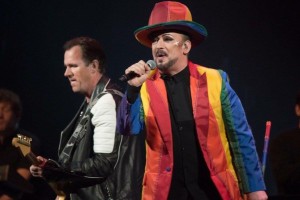 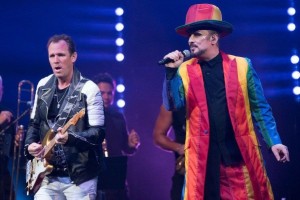 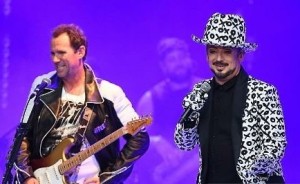 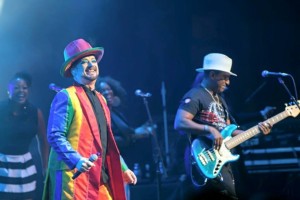