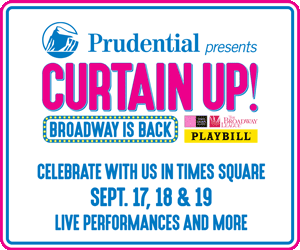 Playbill, in partnership with The Broadway League, the Times Square Alliance, and title sponsor Prudential present Curtain Up!, a three-day outdoor experience in Times Square presented by title sponsor Prudential; sponsored in part by Lexus, Netflix, and United Airlines; with additional support from Audible and the NYC Mayor’s Office of Media and Entertainment. Curtain Up! will include twenty-two unique events taking place on stages in Duffy Square (7th Ave. & 47th St.) and between 45th & 46th Streets throughout the weekend.