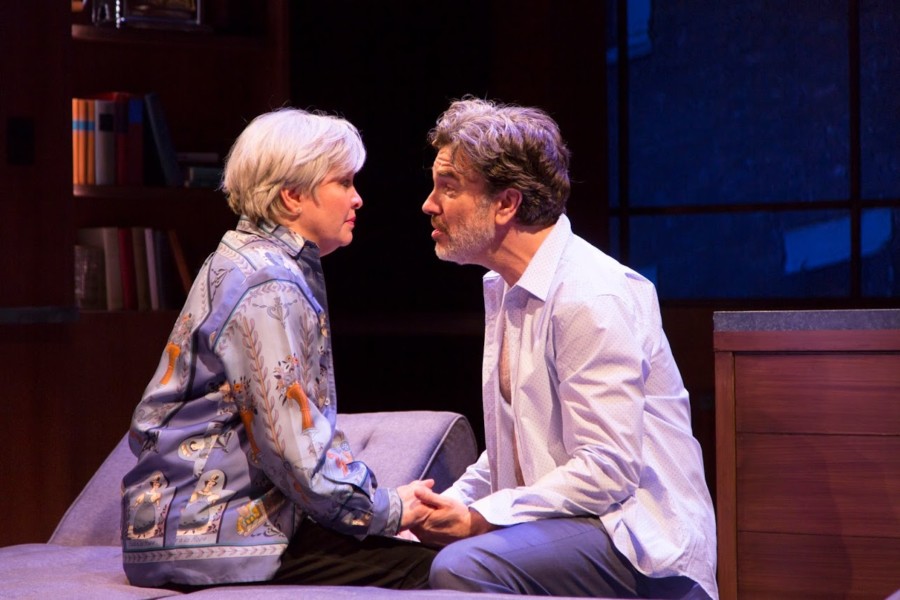 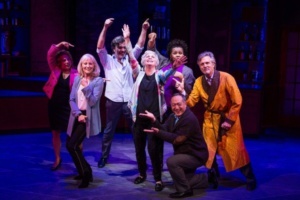 Nancy Opel, pulls a tour de force, as she embodies the Curvy Widow upstairs at the Westside Theatre. This musical is sure to beat Menopause, as the most popular and highest grossing show in town. Critics were not in love when they saw Menopause, but the authors laugh all the way to the bank. Well move over, because Curvy Widow is bound to surpass that fad. 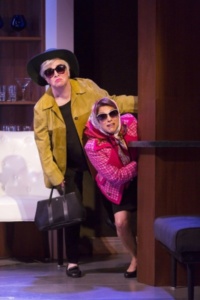 Based on the real life story of the adorable, feisty and optimistic Bobby Goldman, Curvy Widow starts out as Bobby (Ms. Opel) loses her husband screenwriter and playwright Jim (Ken Land), (James Goldman, The Lion in Winter and Follies). Depressed and missing companionship…. ok sex, Bobby upon the advise of her therapist (Alan Muraaoka) learns the joys, the pitfalls and the trauma of Match.com. and condoms. When that fails, she dates married men, only to be left alone on holidays and discover vaginal dryness. Finally, she finds a site for men wanting sex and after weeding out the undesirables, she meets “Prince Charming,” Per Se (Christopher Shyer). Her deceased husband disapproves or is that Bobby’s subconscious not ready to let go? In the meantime her three best friends (Andrea Bianchi, Aisha de Haas, Elizabeth Ward Land) join in her everyday hits and misses, as they live vicariously through her.

Tony Award nominated Nancy Opel is fascinating to watch as she lures us in on her journey past 50, with the pain of losing someone you love and the joys of reclaiming yourself. Vocally she soars with emotional pathos that makes us laugh, cry and relate in what society ignores. The rest of the cast all sings, dances and plays a multiple of roles with panache.

The direction by Peter Flynn is seamless allowing for flow, while the chorography by Marcos Santana is delightfully simplistic. Kudos to the set design by Rob Blissinger, lighting design by Mathew Richards and Brian Hemeseth’s costumes.

Drew Brody’s (music and lyrics), grow on you. With Sondheim-esq arrangements by Wayne Barker, the songs are fleshed out, lush and take us on this musical roller coaster called life.

The book by Ms. Goldman is intelligent, witty and smart. What makes Curvy Widow so fabulous, is Bobby is fearless. She is not afraid to make mistakes, pick herself up and start all over again without being marred or bitter. True she has the funds in which to do so, but so what, money does not erase grief or give you and attitude that is infectious and hilarious. I love the fact, that she moves from 5th Ave. to a loft for a change of scenery. Or that she says good bye to “Prince Charming,” because she is a work in progress and she wants to see how she’ll turn out. In other words a man does not define her.

Considering the demographics for theatregoers this show will appeal immensely. Relatable, funny and enjoyable, time is sometimes the best thing in life. Hey it worked for Auntie Mame!