Cut From Away: The Untold Stories and Song’s From Come From Away 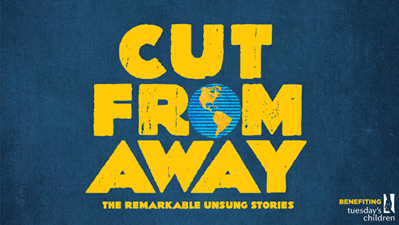 Cut From Away: The Untold Stories and Song’s From Come From Away

The Tony Award-winning, “International Hit” musical Come From Away, now in its third smash hit year on Broadway, presents Cut From Away: The Untold Stories and Song’s, a one night only concert event of songs written for the 4-time Olivier Award-winning Best Musical, on Monday, February 17, 2020, at 7:00pm & 9:30pm, atFeinstein’s/54 Below.  Tickets are now on sale for both performances of Cut From Away: The Untold Stories and Song’s, with a portion of the proceeds going to Tuesday’s Children. Feinstein’s/54 Below is located at 254 W. 54th Street. For more information and tickets, call (646) 476-3551 or visit54below.com.

“Stop The World,” and join us at Feinstein’s/54 Below for Cut From Away: The Untold Stories and Song’s, an evening of great songs and stories written by Tony Award nominees and Olivier Award winners Irene Sankoff & David Hein that did not make it to Come From Away’s opening night on Broadway.  This one-night-only concert features stories, characters and songs that were cut during the smash hit musical’s multi-city road to Broadway.  The concert will be hosted by Irene Sankoff & David Hein and features members of the all-star Broadway Company, Band and Creative Team of Come From Away.  Join us on Monday, February 17, as we celebrate Come From Away beginning its fourth year on Broadway.

“In 2011, we travelled to Newfoundland for the 10th Anniversary of that pivotal day, along with countless returning passengers, pilots and flight crew. We spent almost a month there, interviewing everyone we could and every character in the show was inspired by a friend we made out there. Over our six year journey writing Come From Away we wanted to share every story we heard – all 16,000 of them.” said writing team Irene Sankoff & David Hein, “We had so many song that told amazing stories, but did not quite work to move our 100-minute musical forward, so some of our favorites songs were literally cut from Come From Away. On Monday, February 17, we will perform what was cut, and commemorate those unsung stories.”

Through a time-tested, long-term approach, Tuesday’s Children programming serves and supports our nation’s military Families of the Fallen; builds resilience and common bonds in communities worldwide recovering from tragedies; while keeping the promise to support all those impacted by 9/11. Since 2001, the organization has served over 27,000 individuals through consistent and successful evidence-based programs—trauma and grief support, youth mentoring, mental health services, skills-building workshops, career resources, parenting advisement, youth leadership development, community and family engagement events, and volunteerism opportunities. For more information, please visit tuesdayschildren.org.

Broadway Dims its Lights Tonight For Phyllis Newman
He Says: The Height of the Storm – Another Thunderously Stellar West End Import