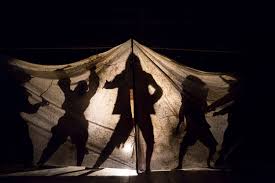 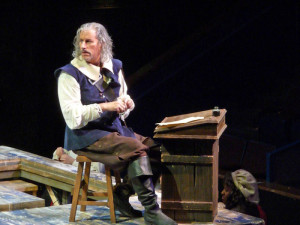 to prolong such fencing, endlessly, in time!

Besides the moment comes, an inevitable one,

and I grieve for those to whom it never comes,

when we feel that a noble love’s within us, so

that each fine word we speak saddens the soul! 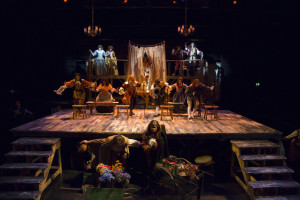 One of my favorite plays is Cyrano de Bergerac by Edmond Rostand. Now Cyrano is being presented by the Resonance Ensemble with an adaptation by director and lead actor Gabe Barre, co-director, stage combat choreographer Rick Sordelet and actor/composer Alexander Sovronsky. Sadly this adaptation cuts some of the most memorable parts to shreds, especially Cyrano’s three amazing speeches. If you know this show the moon speech will not even sound the same. 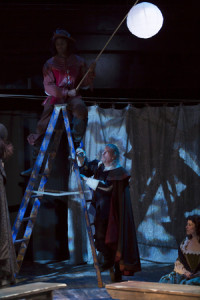 For those who do not know the play our hero Cyrano has an enormous noes along with scintillating wit, poetic nature and intelligence. Thanks to his talent with wielding a sword, he is well respected. In love with his beautiful cousin Roxanne (Bridget Saracen) he is over whelmed with his love for her and yet can not tell her. When Roxanne falls for the handsome, but unintelligent Christian (Luke Darnell). Cyrano has a chance to use Christian to express his love to Roxanne.

Cyrano needs to be a braggart whose pain we see underneath the comic genius. His voice needs to have a lush, romantic cadence, unfortunately Barre does not have that. Instead what we get is older actor that seems more like the character in The Fantasticks. He underplays Cyrano so much that the audience does not fall in love with him as they should. As Christian, Mr. Darnell does not seem to meet the needs of this role. Saracino is an expressive if not fiesty Roxanne.

The actors with the exception of Cyrano all double and triple in roles, so at times it is confusing who is who. What does work is the imaginative direction. This non frills production includes pantomime, shadow play with the performers lit from behind and a wonderful moment at the end where the supporting actors on tall ladders, drop autumn leaves onto the stage as Cyrano recalls the past.

The music in this production, composed by Sovronsky is beautifully played and sung.

Cyrano is the most romantic of all plays and though this is not the most perfect production it is a worthy endevor.