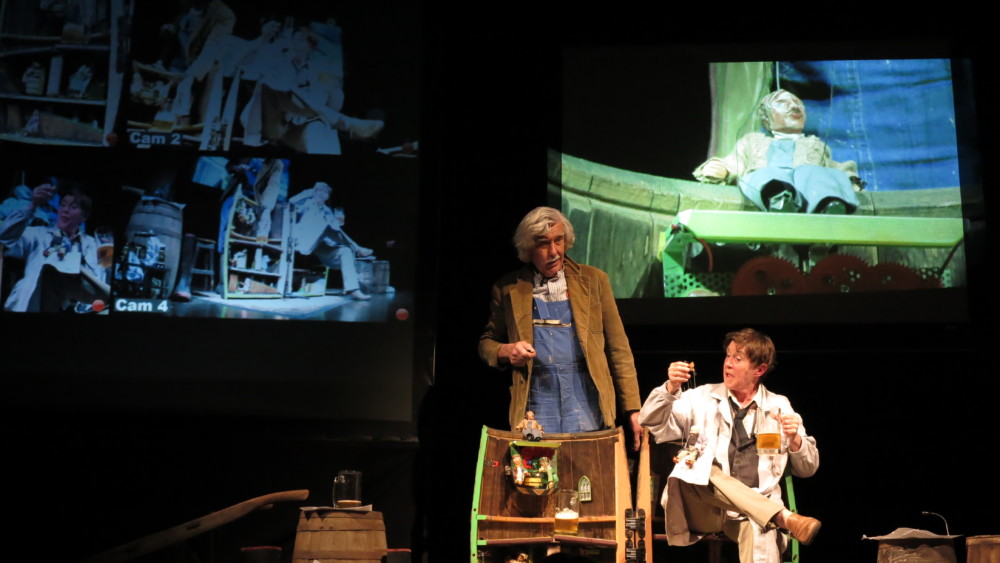 Audience written by Vaclav Havel, translated, perform and directed by Vit Horejs is an absurdist comedy. Focusing on a time in Havel’s life when he was remanded to work at a brewery as punishment for writing critical articles about the communist Czechoslovakian government Audience follows his fictional alter ego. Here Ferdinand Vanek is who habitually summoned by the Brewmaster (Teresa Linnihan) for endless repetitions of dialogue amidst excess consumption of beer.

Havel would eventually go from a prison cell to the presidential palace: from 1989 till  2003 and through the overseeing of the newly formed Czech Republic, Havel led his people toward democracy throughout his long presidency.

With the infusion of the CAMT Marionette’s, The Bohemian Theater has put forth what is billed as Havel’s funniest, most absurdist play.  In a unique staging, the audience members have two big screens to look at with four different cams covering the action. While the set and stage are ample enough to see the performance the big screens add a superb affect highlighting the puppets who are a part of the plays essence.

The production’s concept is by Vit Horejs and Theresa Linnihan, are deft in bringing the puppets to lifelike form from the outset. In a right from wrong standpoint, Vanek (Vit Horejs) refuses to help the Brewmaster write weekly reports about him which offends his boss. Vanek stands by his principals even if it means that he will not get the cushy position of running the warehouse. At first it seems that the Brewmaster holds all the cards, however, as the play moves forward, Vanek, an acclaimed writer, a man celebrated by other writers and actors has all the power and strength. The Brewmaster needs him, his drinking has turned him weak as a boss at the brewery. He is a man who relishes in the old days when things ran smoother. In a feeble attempt, the Brewmaster tries psychological warfare with pointless chatter, clumsy interrogations, flattery and alcohol consumption to make Vanek see things his way.

While the acting was well done, the Marionettes enjoyable, the story was repetitive and at times long winded. The plot has much too say, but it doesn’t have enough consistency in terms of dialogue during the 60 minute performance. Rather than the repetition of questions this play would be better served with deeper dialogue that leaves the audience with more to chew on.