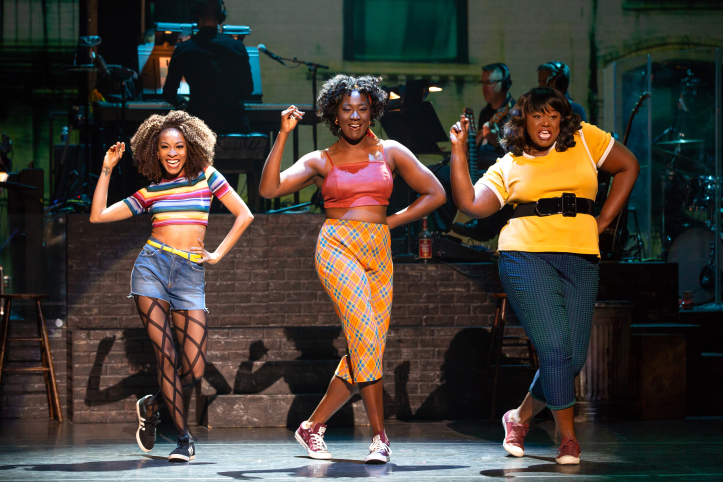 Washington, D.C. and for this one moment, it’s a carnivorous plant that we have to be on the lookout for, and not an #OrangeMonster.

“You better – Tellin’ you, you better – Tell your mama somethin’s gonna – Get her
She better. Ev’rybody better – Beware!”  Why?  Because Megan Hilty (‘Smash‘) is stealing your heart, realizing one of her big dreams. She’s coming for you at the Broadway Center Stage‘s infectious and fun Little Shop of Horrors which is playing at the Eisenhower Theater at The John F. Kennedy Center for the Performing Arts, and although there are far more scary things in D.C. these days than a man-eating plant from outer space, this production, helmed by Mark Brokaw (MTC’s Heisenberg), is a joy to behold.  It’s not a completely slick piece of Broadway theatre ready to hit the main stage, but a paired down semi-staged reading, with the actors holding their script binders, but giving us their all. It reminded me of the fantastic production Hilty starred in with the handsome and wonderful Andy Karlat the NYCC Encores!, Annie Get Your Gun a few years back (2015). And just like that rambunctiously fun production, this rendering of Howard Ashman (book/lyrics) and Alan Menken (music) deliciously camp musical grows and grows, towering up big and strong with each defining moment and unforgettable song, overtaking the theatre with it’s pleasurable acts of world domination.

Hilty (RTC’s Noises Off) seems destined by the theatrical gods to play the part made famous by Ellen Greene when she starred in the original production Off-Off Broadway in 1982, before Greene and the show moved to the Orpheum Theatre Off-Broadway, where it had a five-year run. It closed on November 1, 1987, after 2,209 performances making it the third-longest running musical and the highest-grossing production in Off-Broadway history.  Greene further cemented her imprint on the part of the shopgirl with a dream, Audrey, in the celebrated cult-like film directed by Frank Oz in 1988, bringing her squeaky strong voice to the masses world wide. Hilty does her proud, finding that same essence of sweet naiveté in tightly fitted low cut dresses and stiletto heels, while also not sounding like a carbon copy. In act one, she starts the much loved “Somewhere That’s Green” quietly and earnestly, teasing the enraptured audience with what we all know resides within her voluptuous frame. With each beat and line, she grows the song up powerfully making us all want to stand and cheer. And that’s only the beginning of her conquering us all.

Music director, Joey Chancey (Broadway’s An American In Paris) brings an original feeling to the classic tunes, especially with the chorus of three street urchins/do-wop ladies giving us 1960’s girl-group sass and spark. The trio, in the talented frames of Crystal, played by Amber Iman (Broadway’s Shuffle Along..), Chiffon, by Allison Semmes (Broadway’s Motown), and Ronette by Amma Osei (Broadway’s Rock of Ages), lift us up from the first warnings of “Lookout?”. Choreographed smoothly by Spencer Liff (Broadway’s Head Over Heels), my only dream with these ladies resides in seeing them get a heightened and more glorious presence on the streets of Skid Row.

“I know Seymour’s the greatest,” Hilty sings, “But I’m dating a semi-sadist”, and with Josh Radnor (LCT’s The Babylon Line) in the role of Seymour, we get to bask in all our memories of other Seymours. He does a swell job, rising to the occasion with a greater sense of assurance with each moment of stage.  He couldn’t put to rest my wishful thoughts of having the chance to see Jake Gyllenhaal do the part as he did a few summers back at Encores! (with the magnificent Ellen Greene), but I guess I’ll have to set this thought aside and embrace what Radnor does bring to the role.  It’s a funny piece, the Little Shop, run by Lee Wilkof, Off Broadway’s original Seymour in Little Shop of Horrors, now inhabiting the role of Mr. Mushnik. He, with Radnor deliver a clever recreation of what we all are expecting. It’s not the most original portrayal but I’m not so sure we all want that.

Originality in this production, comes most strongly in the creation of the blood-hungry plant, Audrey II, wheeled out in the grand green clad form of James Monroe Iglehart (Broadway’s Genie in Disney’s Aladdin). There is no puppetry this time around, just a smartly transformative costume design by Jen Caprio (Broadway’s Falsettos) that beautifully lets Iglehart’s plant life grow before our very eyes in ways we weren’t expecting. I only wish Caprio’s designs branched out a bit more to the cast, especially the three young girl group members, giving them a bit more snap a little earlier on. The well orchestrated but slightly clumsy set design by Donyale Werle (Broadway’s In Transit), with simple but workable lighting by Cory Pattak (BCS’s In the Heights) crowds the stage, making it feel awkward, keeping us a bit at arms length from the comings and goings. But for a semi-staged production, the inventiveness of all involved is obvious and on well display even in its most chunky of parts. Nick Cordero (Broadway’s A Bronx Tale) heroically plays Orin Scrivello, the demented dentist, and all others in a never ending conveyor belt of creations that must of had the talented man running wild backstage. I wanted more from the ending, a twist on what is expected or known, even if we only have seen the film (I saw a production of Little Shop decades ago when it opened in Toronto at a perfect little theatre on Yonge Street, sometime in the 1908-‘s).

As act two begins, we all can’t help but hold our breath, waiting for the moment that the true star of the evening, Megan Hilty will perform the song of the night.  It’s “Suddenly Seymour” that we really want to see, not so much the campy bloody digestive habits of a plant trying to take over the world, but the show stopping gloriousness of the perfect song done by the perfectly cast singer. It is her voice that is to be remembered, and rightly so, even if it’s a voice from “the gutter. It’s a night spot, I worked there on my night’s off when we weren’t making much money. I’d put on cheap and tasteless outfits, not nice ones like this“. Hilty has nothing to be ashamed of here. She takes this Little Shop of Horrors far from Skid Row, and hopefully it will land her intergalactic marvel of a voice down on Broadway someday soon, reprising this role in a fully fleshed out production, maybe matched by a Seymour of more dimension.  It’s time, Little Shop, to open your doors once again on Broadway, and to take over the world.

RossJanuary 2, 2023
Read More
Scroll for more
Tap
Melissa Errico Talks to T2C About Her Show at Feinstein’s/54 Below
The Stars Come out For Rose The Waverley Gallery and Happy Birthday Wanda June