Da Vinci & Michelangelo: The Titans Experience Not As Cool As Mark Rodgers Thinks 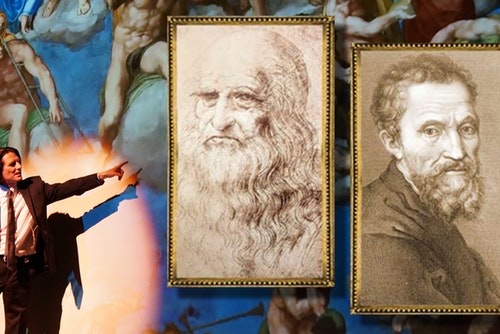 Da Vinci & Michelangelo: The Titans Experience Not As Cool As Mark Rodgers Thinks

Da Vinci & Michelangelo: The Titans Experience, at St. Luke’s Theatre is nothing of what is advertised, nor is it theatre. This lecture belongs in a museums or a community college classroom for those who want to learn about these art masters. Done with videos, a power point and a man who annoyingly tells us “how cool” these two men were. He does this for two hours. He used the term “how cool” over 32 times.

The man’s name is Mark Rodgers, who is also the creator and writer, though you will not find this on the program, or his bio as he omitted it. Maybe because he has no acting experience, as you will soon be able to tell from his flailing arms, histrionic over the top emotions, that seem faker than fake and his mispronunciation of many famous names and places. When I looked up his bio online, I was not surprised to see his background comprised of being a National Sales Director of a Fortune 500 company and not an art history or acting resume credit to be had.

To make matter worse there are a lot of inaccuracies in the information given. One of the things Mr. Rodgers kept confusing were the dates that the two men lived and died. He kept confusing Michaelangelo and Da Vinci’s data.

The information given is random and not at all interesting, if you already know about these two masters. Maybe getting into the spiritual aspects and other unknown facts, would have kept the audiences attention. Many left during intermission.

In the video’s that are extensively used, we get barraged with what sounds like new age elevator music, which is actually consistent with Mr. Rodgers attempt to get the audience to repeat his upbeat statements. At times I felt like I was sitting in a cult church. From what I understand Mr. Rodgers is also the composer. Again no musical background.

Director Bill Stein does nothing to enhance this frenetic actor/ writer. The lighting/ projections (Shari Debandt), sound and computer person kept messing up, as well. There were several times Mr. Rodgers walked out of the spotlight, or his mic went off and towards the end the computer went down as we were asked to wait. I can’t name these individuals, because they aren’t given credit either. Also many times the visuals were out of sync.

The production is exclusively represented by Columbia Artists Theatricals and I have to wonder what they were thinking?