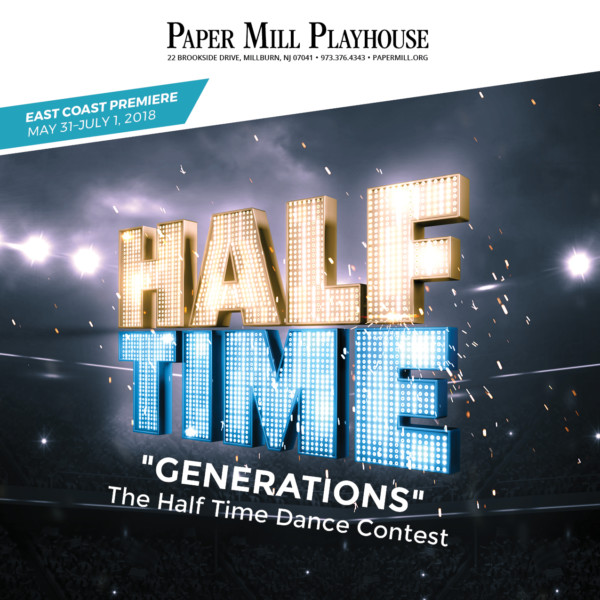 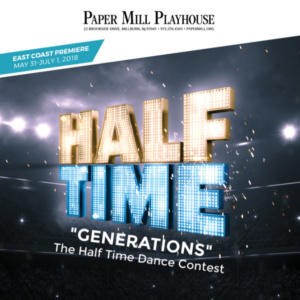 Paper Mill Playhouse (Mark S. Hoebee-Producing Artistic Director, Todd Schmidt-Managing Director), recipient of the 2016 Regional Theatre Tony Award, will host an online contest to promote their production of Half Time, the new musical about not acting your age. “Generations,” The Half Time Dance Contest is a social contest where participants will film a video of multiple generations of their family dancing to whatever music moves them. Can your grandma twerk? Can your dad pop and lock? Can you teach a parent how to dance? We want to see it! Participants will upload their videos to the contest site: https://a.cstmapp.com/p/25418?lc=eng. Contest entries will be accepted from Friday, May 4 through Thursday, May 24, 2018, followed by a public voting period from Friday, May 25 until Friday, June 8. Winners will be announced on Monday, June 11, 2018.

Tickets for four to opening night of Half Time at Paper Mill Playhouse (6/12, 7pm)

Photo of the winning group on the red carpet on opening night of Half Time.

Tickets for three to opening night of Half Time at Paper Mill Playhouse (6/12, 7pm)

Photo of the group on the red carpet on opening night of Half Time.

Tickets for two to opening night of Half Time at Paper Mill Playhouse (6/12, 7pm)

Photo of the group on the red carpet on opening night of Half Time.

Fourth and Fifth place will receive two tickets to a performance of Half Time (6/27-7-1).

Paper Mill Playhouse recently announced the full cast and creative team for the East Coast premiere of Half Time, a new musical, with book by Bob Martin and Chad Beguelin, music by Matthew Sklar, lyrics by Nell Benjamin and additional music by Marvin Hamlisch and Ester Dean.  Half Time begins performances Thursday, May 31, 2018, for a limited engagement through Sunday, July 1, 2018, at Paper Mill Playhouse (22 Brookside Drive) in Millburn, NJ.  Opening Night is set for Tuesday, June 12, 2018 at 7:30 p.m.  Half Time is produced in association with Dori Berinstein and Bill Damaschke. Bank of America is the Major Sponsor of Half Time. Paper Mill Playhouse’s 2017-2018 season is proudly sponsored by Investors Bank.

Half Time will be directed and choreographed by Tony Award winner Jerry Mitchell and co-choreographed by Nick Kenkel with music direction by Charlie Alterman. The cast will feature previously announced five-time Emmy nominee Georgia Engel (“The Mary Tyler Moore Show,” The Drowsy Chaperone) and Tony and Emmy Award winner Lillias White (The Life, “Sesame Street”) along with André De Shields (The Wiz, The Full Monty, Ain’t Misbehavin’). The newest addition to this stellar cast is Tony award winner and Broadway legend Donna McKechnie (A Chorus Line) who with this all-star cast will tell the uplifting true story of ten New Jersey seniors with extraordinary dreams.  Half Time is based on the motion picture “Gotta Dance”, directed, written and produced by Dori Berinstein.

From the director/choreographer of Kinky Boots comes the incredible true story of ten determined dreamers who audition to dance at half time for a major basketball team. They have three things in common: they love to dance, they have something to prove, and they are all over 60. Only after making the cut do they learn they won’t be dancing tap, salsa or swing—instead, they will bring down the house with a style that is entirely new to them: hip-hop. Take the uplifting journey with these dreamers—and the young coaches who inspire them along the way—as they battle self-doubt, stereotypes and even each other for a chance to bust a move at center court in front of 20,000 screaming fans. Together they remind us that in life, when the odds are stacked against you and the challenges seem too great to overcome, it’s not the end of the game—it’s Half Time.

“I am thrilled our new musical Half Time will be a part of the very exciting 2017-2018 Paper Mill season,” stated Tony Award-winning director and choreographer Jerry Mitchell. “Half Time celebrates the singular power of music and dance to unleash big emotions and bring people together.  We can’t wait to share it with the amazing audiences at Paper Mill.”

Tickets are on sale now starting at $34. Tickets may be purchased by calling 973.376.4343, at the Paper Mill Playhouse Box Office at 22 Brookside Drive in Millburn, or online at www.PaperMill.org. Visa, MasterCard, Discover, and American Express accepted. Groups of 10 or more can receive up to a 40% discount on tickets and should call 973.315.1680. Students may order $23 rush tickets over the phone or in person at the Paper Mill Playhouse box office on the day of the performance. Paper Mill Playhouse’s 2017/2018 season is proudly sponsored by Investors Bank.

Q&A with the Cast: After the matinee on Saturday, June 30, stick around for a lively Q&A with cast members directly following the performance.

Paper Mill Playhouse, a not-for-profit arts organization under the direction of Mark S. Hoebee (Producing Artistic Director) and Todd Schmidt (Managing Director) and recipient of the 2016 Regional Theatre Tony Award, is one of the country’s leading regional theaters.  Paper Mill Playhouse programs are made possible, in part, by funds from the New Jersey State Council on the Arts, a partner agency of the National Endowment for the Arts. Paper Mill Playhouse is a member of the National Alliance for Musical Theatre, the Council of Stock Theatres, and the New Jersey Theatre Alliance.