Tony Award-winning actress Bebe Neuwiirth will host the 40th Anniversary and reunion of the original cast of Bob Fosse’s Dancin’on March 26th at 7 PM at St. Luke’s Theatre, 308 West 46th Street, NYC.  The evening, presented by Dancers Over 40, will feature members of the original Broadway cast as well as others that joined the show during the run.  Ms. Neuwirth appeared in Dancin’ during the final four months of the Broadway engagement.

Ann Reinking will also be presented with the LaDuca Lifetime Achievement in Dance by Bebe Neuwirth and Phil LaDuca. The LaDuca Award, created in 2012 by theatrical shoe designer Phil LaDuca, honors ‘the greats of dance.’ 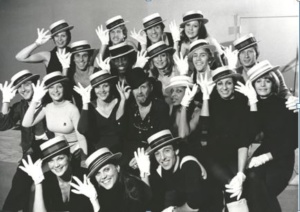 In addition to Ms. Neuwirth, original cast members who will appear include (in alphabetical order): Gail Benedict, Sandahl Bergman, Wayne Cilento, Christine Colby, Jill Cook, Rickard Korthaze, Ann Reinking, William Whitener and Fosse Dancin’ assistant and long time DO40 member, Kathryn Doby.  (Nicole Fosse, daughter of Bob Fosse and Gwen Verdon, will also be at the celebration.) There will be two panels, the reunion with original cast members, moderated by author, theater historian and now documentary filmmaker Ken Bloom(BROADWAY MUSICALS: The 101 Greatest Shows of all Time and the upcoming documentary on Gwen Verdon) and a panel hosted by DO40 member and author of the new book on Bob Fosse, Kevin Winkler, and include Dancin’ cast replacements including Eileen Casey, Lloyd Culbreath, Clif de Raita, James Horvath, Michael Kubala and Valerie Miller. DANCIN’ cast members we have lost, including DO40 founding member John Mineo, as well as Rene Ceballos, Chris Chadman, Ed Love and Charles Ward, will be acknowledged.

Dancers Over 40 is an all-volunteer, membership-driven non-profit arts organization dedicated to preserving the History, Legacy and Lives of our mature creative community, while sharing the knowledge with the younger generation, particularly dancers just beginning their careers.

What To Watch September 11th To Take Away The Blues

What To Watch August 22nd To Take Away The Blues

Suzanna BowlingAugust 21, 2020
Read More
Scroll for more
Tap
He Says: Edward Albee’s At Home at the Zoo: To Be or Not To Be An Animal or Vegetable
What’s In A Name? The Signature Project Connects The Dots