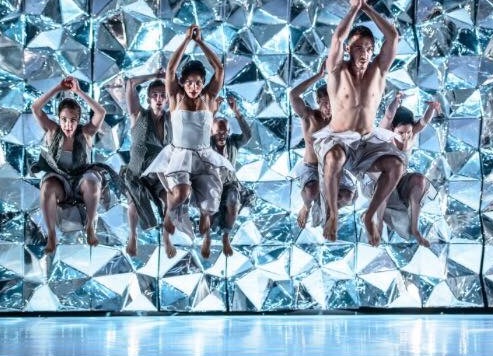 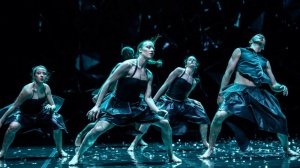 As the familiar Jule Styne penned song pontificates, “diamonds are a girl’s best friend”, however I think there is a little something for everyone to enjoy at the Chicago premiere of the internationally renowned 2014 piece, Black Diamond. Performed by the Danish Dance Theatre, this stunning piece and its despondent and futuristic artistry, is making its Midwestern debut after successful runs internationally, and stops this fall at the Joyce Theater in New York and The Kennedy Center in Washington D.C. The toast of Europe now opening to an enthusiastic Windy City audience. Artistic Director and Choreographer, Tim Rushton, ushered in this abstract modern dance piece, ripe with sexuality and passion, authority and craving. Taking inspiration from a diamond itself, the piece was multifaceted; angular, precious and oh so striking. Blending visual inspiration as varied as The Matrix, The Borg Collective from Star Trek, Blade Runner, Metropolis and performance artist popstar, Lady Gaga, the images presented dazzled as the dancer’s movements inspired. 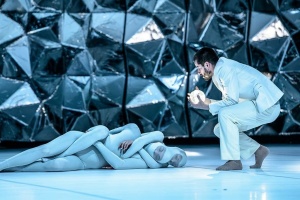 As the music from Violinist Alexander, Tom Opdahl, Balanescu Quartet, the beat king Trentemoller and composer Philip Glass began, the curtain rose to just three dancers, center stage. One laying shirtless on the ground, while the other two, dressed in black, preened around him. The falling confetti cascaded to the stage while the sexy, strong, daring and powerful dancers began their robotic and industrial inspired routines. With no clear or distinct narrative, the juxtaposition between mechanical, sharp, edgy movements and the more intrinsically organic leg and arm extensions was quite riveting.  The dramatic backdrop, with its dangerous angles and perspectives, was intentionally at odds with the graceful performers on stage. Like a giant, ominous, diamond cloud blocking out the sun behind them. I found this modern dance and its abstract universe a delightful escape. Split into two pieces, the second vignette featured a duo of dancers intertwined around one another, like a faceless human braid. As they each held a mystical orb of light, they slowly unraveled, becoming two separate individuals from one. The emotional impact coming at the end of the piece, as the female dancer was stripped down to her nude body, a free form, standing bare, symbolizing both hope and humanity in this artistically crafted abstract universe. 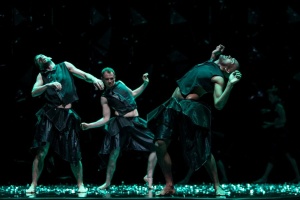 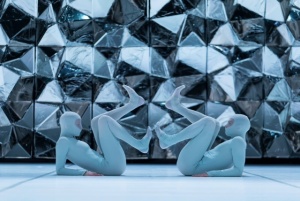 Danish Dance Theatre Black Diamond  was remarkable to behold and experience. The flowing organic, gravity defying movement of the dancers contrasted against a hard and stern backdrop featuring and exaggerated diamond’s sharpened edges. Combining music, modern dance and an inspired visual pallet, this conceptual and futuristic universe may have appeared bleak at first, but with the promise of a new day hinted at the story’s end. Man will indeed triumph over any adversity, beautifully, as it were.