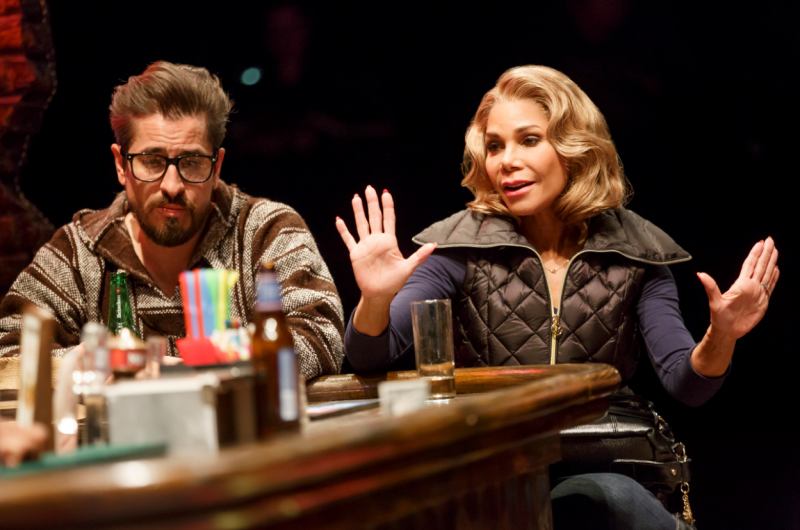 Daphne’s Dive Where Sorrows Are Not Drowned

Daphne’s Dive Where Sorrows Are Not Drowned 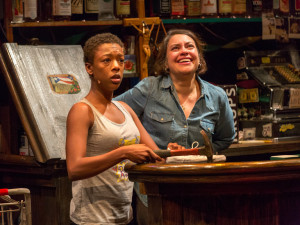 Quiara Alegría Hudes (In The Heights, 2012 Pulitzer Prize in Drama for Water by the Spoonful) new play Daphne’s Dive goes nowhere. Set in a North Philly bar, owned by Daphne (Vanessa Aspillaga) we see the same seven people in a time span of eighteen years. The play starts with Rudy (Samira Wiley, Poussey in Orange is the New Black) announcing she is eleven. As Ruby ages to 15, 20, 25 and finally 29 we see the changes in the neighborhood, income and personalities. In Daphne’s bar we meet Pablo (Matt Saldivar) who paints other people’s trash; Rey (Gordon Joseph Weiss) a motorcycle enthusiast who is a free spirit; Jenn (K.K. Moggie) an avant garde protester who wants to make the world wake up, who barters for a living; Daphne’s sister Inez (Daphne Rubin-Vega), a rich suburban housewife, whose husband Acosta (Carlos Gomez), a successful entrepreneur has political aspirations. When Ruby (Wiley), jumps out her families apartment window after a police raid she is found behind the dumpster by Pablo covered in glass fragments. Daphne adopts her when she learns of her sexual abuse, which Daphne can relate to. 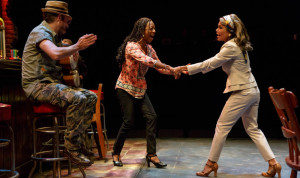 All of these characters seem as if they are caricatures of real people and their issues seem over the top and non realistic. For example Daphne has major stomach problems through out the play yet she drinks and slugs the shots back with the rest of them and is still ok, eighteen years later. Acosta makes it up the political ladder and ends up in the final segment as the cheating political figure, who cheats on his wife, yet there was no indication leading to this final moment. Everyone has traumas and one too many sorrows, that you wonder what is the use of living.

Tommy Kail (Hamilton) directs and half the time you miss part of the action due to the set by Donyale Werle. If you have the audience on either side of the stage make the bar lower or the stools higher. The cast is wonderful and I just wish a better play for their talents. The costumes by Toni-Leslie James really set the time change, as do the wigs by an uncredited name. The music by Michel Camilois is fabulous and I would love to own a CD of his originally pieces.