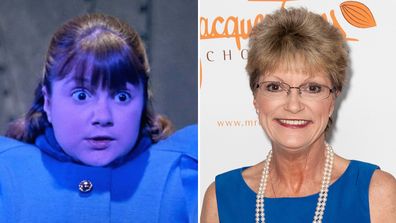 Violet Beauregard from Willy Wonka & The Chocolate Factory Denise Nickerson has passed away at the age 62. She died in her hospital bed Wednesday at approximately 10:30pm Colorado time.

Nickerson was rushed to the hospital earlier this week, diagnosed with pneumonia, and suffered a seizure. She was placed on life support, but on Wednesday they had taken Nickerson off her respirator.

Her son, Josh, and his wife are at the hospital with Denise, and started a GoFundMe to honor Denise’s last wishes of being cremated, and her ashes turned into glass artwork.

In 2018 the Denver, Colorado resident had a pacemaker but she had a difficult reaction to it .

Born in New York City, Nickerson made appearances in the late 1960s on such shows as The Doctors, and opposite Bill Bixby in an unsold television pilot called Rome Sweet Rome. Nickerson’s big break came in 1968 when she joined the cast of ABC-TV’s Dark Shadows, appearing as recurring characters Amy Jennings and Nora Collins from 1968–1970. Upon leaving Dark Shadows, she appeared in the 1971 television movie The Neon Ceiling.

In 1971, Nickerson was cast as the nymphet Lolita in the 1971 ill-fated musical, Lolita, My Love during its run on Boston, which closed on the road.

Also at this time, Nickerson landed her signature role as gum-chewing Violet Beauregarde in the 1971 film Willy Wonka & the Chocolate Factory, when she was 13 years old.

From 1972–73, Nickerson joined the cast of The Electric Company as “Allison”, a member of the Short Circus music group. She also guest starred as Pamela (one of two dates Peter Brady had on one night) in one of the final The Brady Bunch episodes, “Two Petes in a Pod”. She also auditioned for the role of Regan MacNeil, in The Exorcist.

Nickerson created the role of Liza Walton on the CBS soap, Search for Tomorrow. She remained with the series until they decided to age the character and make her one of the show’s romantic heroines.

In 1973, Nickerson starred in the TV movie The Man Who Could Talk to Kids, opposite Peter Boyle and Scott Jacoby. In 1975 she appeared in the satiric, beauty-pageant inspired motion picture Smile, as Miss San Diego’s Shirley Tolstoy (also starring a young Melanie Griffith and Annette O’Toole.)

Nickerson appeared in the 1978 films Zero to Sixty and TV film Child of Glass.