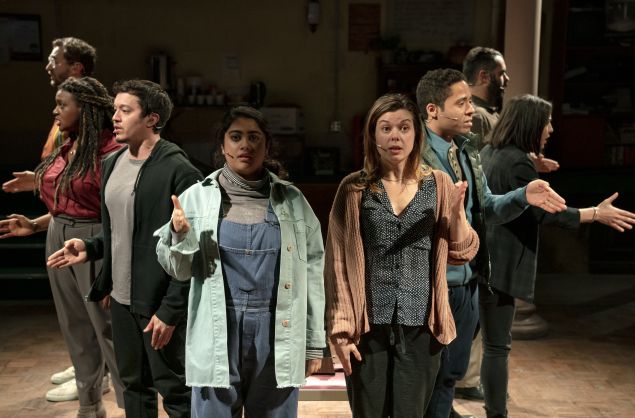 I feel my body stretched between two cliffs / One side is fantasy / The other reality / I feel my fingers start to lose their grip / And I can’t hold on.

Three-time Tony Award-nominee Dave Malloy (Natasha, Pierre & The Great Comet of 1812) brings the world premiere of his new musical Octet, to the Signature stage. Deftly directed by Annie Tippe (Ghost Quartet). Featuring a cast that vocally knows how to thrill. This show which mixes an cappella chamber choir, tarot, internet addiction and the indelible flaws that lurk with in us all.

We enter a church basement set up for an AA meeting of sorts. This basement is downtrodden and has seen better days. We meet the eight addicts who call themselves the Friends of Saul. This support group allows the participants to spew out their feelings and dependency to hopefully move forward.

In the group Jessica’s (Margo Seibert) meltdown went viral. Henry (Alex Gibson) finds the candy games on his smartphone, a fixation of sweet. Karly (Kim Blanck) swept right on grind on too many times. She muses how this porn obsessed app, is full of men who hate women and how this easily can lead to violence. Ed (Adam Bashian) also has problems with online dating and echo’s the violence motif, but this time it is about cops incel POV. Paula husband brings their cell phones into the bedroom, creating a marital divide. Facilitator Paula (Starr Busby) helps make Velma’s (Kuhoo Verma) first time. Marvin (J.D. Mollison) explains how he and his fellow scientists try to prove the existence of God, who appeared before them as a bratty 12-year-old girl.

The third song towards the end was the most powerful as Toby (Justin Gregory Lopez) talked about QAnon conspiracy theories, the manipulation of the internet and how we are being made to feel numb, was spectacularly on the money. If this had been the last song I would of stood up and yelled bravo!

In the end, a tea ceremony, laced with a “group psychedelic,” that seemed like a mild Iowaska brings the group to their final conclusions.

Malloy’s score is glorious, as it transfixes you in its majestic harmonies. Malloy does not write in one key signature or style, he skips around embracing the musical styles of musical theatre, country, indie-rock, punk, electronica and so much more. The vocal arrangements are sublime with harmonies, beboxing, body drumming, pitch pipes and guttural sounds, that come from deep within. Then there are the lyrics and the book, that cut through the way things are suppose to be to the way things are. They are clever, witty, insightful and cutting.

Annie Tippe’s staging keeps us lingering between reality and the beyond. She is in complete sync with Malloy, creating a world that shines a light on the truth of where we have gone.

Amy Rubin and Brittany Vasta’s set immerses you into this place that is so familiar, while Christopher Bowser’s lighting is unsettling. Brenda Abbandandolo’s costumes especially for Toby are simple, yet haunting.

Not everyone will find this show their cup of tea, but if you love being immersed in music and facing the reality of how the internet is destroying our humanity, you will love this as much as I did.

Genevieve Rafter KeddyAugust 5, 2022
Read More
Scroll for more
Tap
He Says: Happy Talk Deflates But Ireland Floats Up High
Proof Of Love Or Coming Into Ones Self