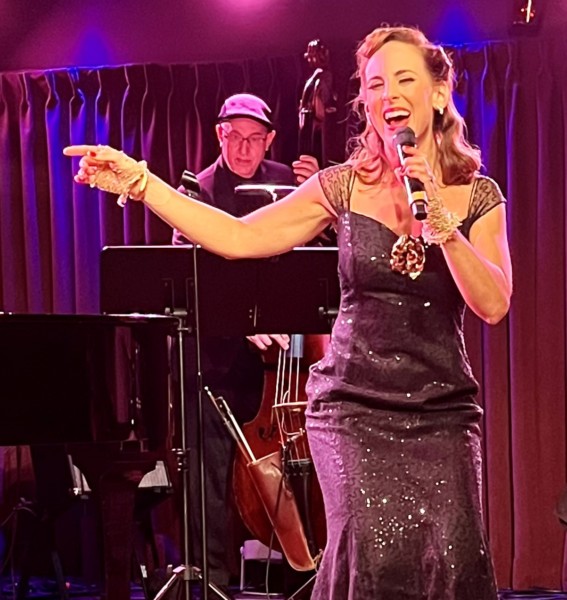 I first met Dawn Derow in January 2020 when she told me of her plans to record her CD My Ship: Songs from 1941 that following month. We know what soon happened after that and finally the CD has been produced by ZOHO Music, and based on Ms. Derow’s show at The Green Room 42 on January 15th I can say was worth the wait.

The evening began with a wonderful instrumental of Take the A Train by her band: Tom Hubbard on bass, Daniel Glass on drums and Ian Herman, her musical director, on piano. Since the song selections were from 1941 the overture was accompanied by a wonderful slide show of black and white photos dating back to that era to get us into the mood concluding with a black and white photo of the star Ms. Derow herself. Dawn walked onto stage in her seamed stockings, glimmering gown and vintage gloves that were given to her by her grandmother. We had been transported back to 1941.

Her opening number was a heartfelt Lover Man which unlike her stockings segued seamlessly into Let’s Get Away from It All. Dawn had performed in the Green Room before; but, she informed her happy audience that this was her first time doing a full show and I’m sure it won’t be her last. Her next song How About You starts with the words “I like New York in June” and despite the temperatures outside being in the 20’s this song warmed up her audience.

Her rendition of Skylark was truly beautiful hitting all the right notes that Johnny Mercer wrote 70 years ago. What throwback to 1941 would be complete without a trio of Andrews Sisters songs? Dawn did not disappoint the audience when the first bars of Boogie Woogie Bugle Boy were played meshing with Don’t Sit Under the Apple Tree and finally The Hut Sut Song when her two back up singers, Markell Grutsch and Chloe Lafleur joined her on stage in harmony and wonderful dance steps choreographed by Markell. The ladies returned later in the show to sing and dance about a much more fun Chattanooga Choo Choo than Glen Miller could have imagined when it originally rolled onto the hit parade.

Throughout the show Dawn talked about the year 1941, an amazing year for songs like these and the other arts, and she played a sweet trivia contest with the audience asking questions about the year – a sweet game especially since the prize for correct answers was a packet of M&Ms, that candy covered chocolate that didn’t melt in your hands and was invented in that year. But hearts were melted when she sang the title song of her CD, My Ship, full of emotion and longing. The well-paced show directed by Jeff Harner was filled with a variety of songs alternating between ballads like At Last and an operatic White Cliffs of Dover to fun and witty songs like The Saga of Jenny and Disney’s When I See an Elephant Fly.

Dawn is a performer that brings to the stage heart, fun and sexuality as she demonstrated in her medley of Just Squeeze Me and I Got It Bad.

If you missed this show you can pick up her CD, My Ship (Songs from 1941), or listen to her on Spotify.