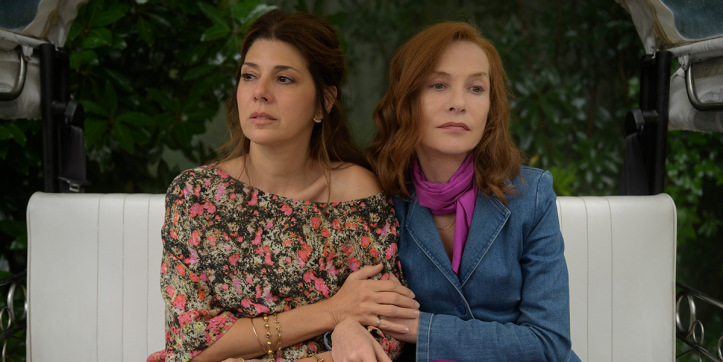 It was Day 1 at the Toronto International Film Festival (#TIFF19), and I was surrounded by stellar French actresses on screen as I dove headfirst into the movies of my first weekend of the film festival. Two films with three amazing iconic French actresses, with two of them playing celebrated movie actresses, oddly enough. First up, Isabelle Huppert (Paul Verhoeven’s 2016 ‘Elle‘, ATC’s The Mother) portrays a famous film and television actress who has summoned her idiosyncratic loved ones to join her for a holiday walking the lovely green and brown pathways of Sintra. Taking in the beauty of the landscape both lush and barren, Huppert rules the Portuguese town playing host to Ira Sachs’ (‘Little Men’) beguiling film ‘Frankie‘. With delicacy, Huppert layers a breezy mischievousness over the heartbreak and pain of a loss that is approaching. She’s effortlessly elegant and photogenic, as she states wryly in the first scene, unearthing humor carved out of her personal tragedy and the slight coolness she has towards her children. All the while, systematically displaying tenderness to her current and former husbands (Gleeson and Pascal Greggory, respectively). It’s a compellingly complicated portrayal, when it works, thinking that she can manipulate everything around. The coolness sometimes backfires, never really engaging us deeply within her plight, probably in the same way it has produced a structured distance with her two children. It’s odd and distracting, this non-engagement, especially when balanced authentically with the awkward adoration of fame that surrounds her.

Her two children; the wistfully lonely son Paul, played with a disturbing confessional quality by the earthbound Jérémie Renier, and her unhappily attached daughter Sylvia, brittlely portrayed by the lovely Vinette Robinson, rarely feel connected to the same tribe. In someways their relations are complicated by their historic attachment that is revealed inauthentically casual manner to a new acquaintance. The dialogue and the direction do little to help create organic interactions and revelations, although we are continually being asked to believe these moments are sincere, rather than just required for the plot to move forward. Sylvia has arrived with her husband Ian (Ariyon Bakare) who struggles to be kind and engaged. Their emotionally troubled daughter Maya (Sennia Nanua) only wants to find escape at the beach far from that same family. Her coming of age story is somewhere out in the deep blue sea, awash in other colors and connections. And her and her family never seems interwoven in the same fabric as Frankie and Paul’s intimacy. Maybe it’s a mother/son thing, but Sylvia and most importantly Maya’s awakening, although beautifully enacted, feels like it’s from a different family and a totally different movie.

Frankie, never one to just let things be, has also invited an old friend, Irene, beautifully portrayed by the detailed and expressive Marisa Tomei. She plays a film-set hair stylist who Frankie adores and who just happens to have some time off from a film she is working on in Portugal. Random as it sounds, it adds one of the more real interpersonal connections to the otherwise fractured film, beyond a very touching love moment between Frankie and her husband. Like that moment, Irene and Frankie have such a heartfelt engagement, deeper and more true than any connection she has with her children, but there is also a secret plan lurking in her devotion. A desire inside Frankie to play cupid with Irene and her perpetually single son, Paul. It’s a plot Frankie doesn’t share with anyone, including Irene, who casually brings along Gary (Greg Kinnear), a Hollywood cinematographer who has a few hopes and dreams of his own that definitely include Irene. Tomei brings clarity and realness to every scene she is in, devastatingly so. “No bullshit“, is her thing, even when the dialogue (screenplay by Mauricio Zacharias and Sachs) that permeates the whole dynamic feels stilted, disconnected, and overly theatrical.

The desire for love and attachment seems to hang over the characters like the fog over the beautiful landscape of Sintra (cinematography by Rui Poças). It gives the piece an edge and feeling that something dramatic is about to happen. ‘Frankie‘ is seen as attempting to connect with her kids and explain the real reason she’s brought them here, but the scenes feel fractured, and her connection with her daughter, Sylvia feels almost nonexistent. This is not, I must add, because of a lack of talent by its crew of well-established actors, but more in the editing (Sophie Reine) and pacing within the screenplay and, more importantly, the direction, that never finds the pathway to convey authentic hidden depths with their words, gestures, or vistas.

The last shot is synonymous with what this family is all about; standing on the brink looking off to the horizon with so much distance between the differing fractions, attachments, and solidarities. It’s meant to be the climax of the trip, this gathering at the water’s edge, something talked about throughout the film as utterly important and profound, but it fails to register as that. Water is said to cure all maladies, so they say, and somewhere in that myth the characters must try to accept their fate for the sake of one another and for their mother, but it is diluted of power or enmeshment. As they congregate and then slowly return to their lodging and their lives, the family and friend are left with Little resolution or salvation. No one feels more connected or at peace then when they first arrived. Sad, especially with all the talent that has come together is the beautiful town of Sintra.

Over in Paris in ‘The Truth‘ / ‘La Vérité’, another great French actress, Catherine Deneuve (Roman Polanski’s 1965 ‘Repulsion’) stars as the famous great French screen legend Fabienne, struggling to mend wounds with her long-estranged daughter, Lumir, a screenwriter, who also happens to be played by another great French actress, Juliette Binoche (Anthony Minghella’s 1996 ‘The English Patient‘). Deneuve, as led by the acclaimed Hirokazu Kore-eda’s (‘Shoplifters’, ‘Like Father, Like Son’) in his first film made outside of his native Japan, gives a beautifully nuanced performance. In this detailed mother/daughter conflictual reunion, the collaborations and entanglements trigger long-buried disappointments that have only deepened over time. With Binoche and the wonderfully raw Ethan Hawke (Richard Linklater’s 995 ‘Before Sunrise‘, Broadway/RTC’s True West) as her second-tier actor husband, Hank, the exploration of love, art, and responsibility to one another flows out of the house that looks like a castle (stunning Cinematography by Eric Gautier). The long stewing resentments have the force of a wild and powerful witch jumping forth out a cherished storybook. It’s no surprise the house sits proudly in front of a prison, as the walls of both are an unforgiving trap, keeping them tied to their past mistakes like a jailed inmate desperate for a kind parole hearing.

Deneuve’s unforgiving character, a woman who never feels she needs to apologize for anything to anyone (especially a man), drives the piece forward in a way that ‘Frankie‘ couldn’t find anywhere in Portugal. With Deneuve’s character ilming a movie called ‘Memories of Your Mother‘, Fabienne clumsily tries to find the poetry and the emotional connection that is misrepresented in her memoir, a book that infuriates all that are connected to the star. When her assistant suddenly and dramatically resigns for the same lack of appreciation, Lumir takes over his role just as Fabienne begins work playing the role of an elderly daughter in a science-fiction film. The parallels between the film project and Favienne’s life start to unravel and entwine all involved, including the young actress at the center of the sci-fi film (a beautiful Manon Clavel). The actress and her role within a role reminds both mother and daughter of a past connection with another actress of Fabienne’s generation that drove a wedge of resentment between the two long ago. A fracture that ended tragically, forever tarnishing their trust and attachment.

As the confrontations grow on and off set, ‘The Truth‘ / ‘La Vérité’ forces the two to look at a past where one can’t trust memory or believe in one another. They can only battle a kind and maternal ghost that haunts their bitter familial relationship. The two bring their knotted “bad mother/bad friend/good actress” relationship towards a place of new understanding with Fabienne, whose tendency is to save her feelings for the camera, and Lumir, who tries to control her world by writing it into being. Somewhere the two find a place of peace where the truth and the myth remain foggy and hard to grab hold of. But their bond is undeniable, even if apologies and tender confessionals are written by another.

It’s a beautifully crafted film by an obvious expert, even when the cruelties are not lost in translation, but physicalized with a power that these French actresses possess with aplomb.

All these famous actors playing legendary screen actors.  It’s a magnificent way to begin my dive into the TIFF pool, I just hope I do it as elegantly as Huppert can in those first few moments of ‘Frankie‘. Topless and proud of everything she has to give.

WriterAugust 3, 2022
Read More
Scroll for more
Tap
Take a Gander at You Are Here
Day 2 at TIFF19: ‘Clifton Hill’ Shines Bright in Dark and Mysterious Neon