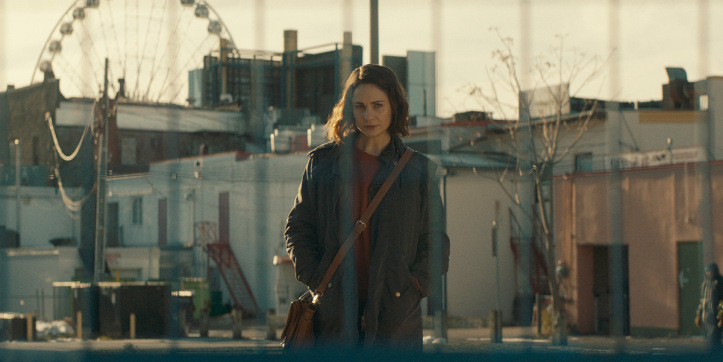 It’s a tense start, without a doubt. Simple but disturbing, with orchestrations (Alex Sowinski, Leland Whitty) that swell and sting. The music laces the scenario with an uncomfortable intensity that borders on distraction. But it works, and with the neon colors of Niagara Falls lighting up Albert Shin’s psychological thriller most beautifully, I was feeling very fortunate. It’s a blessing to have the opportunity to see this mesmerizing film at the Toronto International Film Festival (#TIFF19), which is as pulse pounding as the festival itself. TIFF is a madhouse of excitement, and on my second day, I stood transfixed and confused by the assortment of films all having P&I’s at the same time unsure which way to turn. I was basically spinning in circles with excited adrenaline, asking myself: Should I go with Almodóvar’s ‘Pain and Glory‘ starring Antonio Banderas as an aging filmmaker? Or ‘Clifton Hill’, the highly anticipated third feature from Shin, a Toronto director favorite, whose ‘In Her Place’ was named on TIFF’s 2014 Canada’s Top Ten?Ultimately it was an easy call as I went with the Canadian, patriotically, as I am one, born and raised. And it just seemed the right thing to do at the magnificent and enormous Toronto International Film Festival. The city is awash in excitement, closing down blocks of streets so fans can feel a part of the celebration, and the festival was so gracious in giving little ol’ me access to the Press & Industry Screenings. So I had to do the patriotic thing. And what a solid choice that was (even after hearing others rave about ‘Pain and Glory‘…I hope I will have the chance to see it at the NYFF). And I couldn’t be more proud of this level of inventive storytelling and creative film work coming out of Canada and Rhombus Media Inc.

Shin’s work clearly resonates, as we watch his latest film expose the seedy underbelly of a messed up dynamic through the nervous eyes of its complicated heroine, Abby, played to compelling perfection by Tuppence Middleton (Netflix’s “Sense8“) has returned to Niagara Falls, riding the bus into her hometown for the reading of her mother’s will and settle her estate, which is basically just a rundown motel on the heart of the tourist area. But a haunting memory of a horrific kidnapping that she witnessed when she was young creeps back into her compulsive mind, refusing to be dispatched and disappear over the falls. And then she finds a few pictures in a box at the motel; a snapshot of a family, her family, happily fishing on the bank of the river, and a mysterious woman standing by a car. But she knows she wasn’t happy at that moment, as clearly as she know that that car and that woman needs to be identified for her to find any peace or resolution in this dark confusing world of hers.It’s a startling beginning, but it ensnares us, just as much as her fragmented memory drives her forward obsessively.  She needs answers, and attempts to enlist her estranged sister, Laurie, gorgeously played by Hannah Gross (“Mindhunter“) and her sweet husband, portrayed by my “Schitt’s Creek” crush, Noah Reid (He’s simple the best), but truth and lies have always blurred their faith in Abby over the years. They want to believe, but have been given so many reasons not to. Her compulsive desire to reconcile her past and her chaotic memories doesn’t make it easier on them, especially as revelations of her own past see the light of day, and we join with the concerned sister in wondering about her actions and impulses. David Cronenberg, the legendary Canadian filmmaker, known as the ‘King of Venereal Horror’ or the ‘Baron of Blood’, almost steals the thunder out from under their very feet, as resident paranoid podcaster, Walter. He’s that town’s oddball fixture, the owner of the Flying Saucer Diner who has some twisty theories about everyone in town, including a sideshow attraction, the animalistic performers within, and the rich Lake family who seems to owns just about everything and everyone in town, headed by the young and handsome Charlie, played solidly by Eric Johnson (“The Knick“). He’s just too good looking to trust, or are we just being as paranoid as Walter and Abby?Shin and cowriter James Schultz have crafted a sharp and satisfying suspenseful drama, that generally keeps us tuned in, even when some of the plot twists spin too far out of control to completely follow. The visuals, courtesy of cinematographer Catherine Lutes are as unforgettable as Middleton’s depiction of this tortured soul. Middleton delivers a steadfast portrayal of a woman filled to the brim with pain and guilt, so much so she’s almost as unsure of her own self overflowing as the others are around her. The back and forth of her impulsiveness and destructive borrowings of other people’s truths feel as perplexing and scary as her sister’s faith in the troubled Abby, causing both empathy and fear in our hearts for this struggling woman. Shin’s work expertly dives deep into the dark sordid waters of this idyllic tourist town, and all those who call it their home. It will never look the same, nor should it, as all places of this sort always have a few tales hidden at the bottom of the river bed just waiting for a man like Walter to dig up. I’m glad I made that last minute decision to head to Niagara Falls and “Clifton Hill“. It’s a visit I won’t forget.And Pedro can wait for NYFF.

The Collection Of Steve Martin Goes Up For Auction