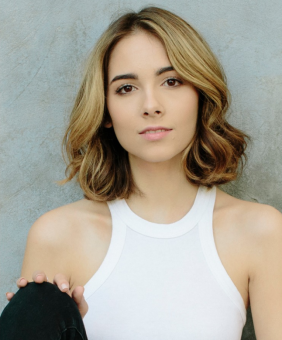 Daytime Emmy Nominated Actress Haley Pullos is set to star in Netflix’s newest Latinx comedy, “The Expanding Universe of Ashley Garcia.” The show, co-created by Mario Lopez (“Access Hollywood”) and Seth Kurland (Producer, “Friends”), follows a 15-year-old robotics engineer and scientist who moves across the country to live with her negligent uncle while she gets the chance to work at NASA.

Haley recently celebrated 11 years on ABC’s hit television show, “General Hospital” (2009-2019) where she continues to play the role of Molly Lansing-Davis. As of August 2019, Haley has been featured in 402 episodes since she began the role in 2009.

For her endeavors as a successful actress, Haley has won various awards including four Young Artist Awards for Best Performance in a Daytime TV Series for her work on General Hospital from 2010 to 2014. She was also nominated in 2015 for aDaytime Emmy Award for Outstanding Younger Actress in a Drama Series.

Haley made her acting debut in 2007 starring in two television series, “‘Til Death”(2007) and “Moonlight”(2007) and landed her first recurring television role as Young Melinda on CBS’s “Ghost Whisperer” (2008). The following year she began her role on “General Hospital.” Between filming for “General Hospital,” she continues to make guest appearances on multiple television shows.