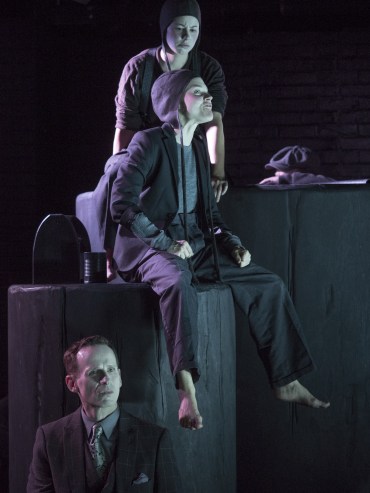 Dead End: Happy Endings But Only in the Movies

Dead End: Happy Endings But Only in the Movies 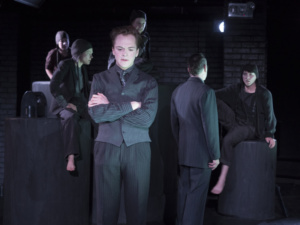 It opens with a wondrous photo like image. A black and white tableau with a strong sense of old time New York City or at least the Hollywood version of the city. Chad Yarborough, the set designer, made surprisingly good use of the small basement space of the Axis Theatre Company. Sidney Kingsley’s Dead End, a play rich in its own history, takes us back to the 1930’s period when NYC was suffering huge inequalities in its social order. The scene before us is of the wealthy on one side of the stage, dressed in tailored suits and cocktail dresses, courtesy of the simplistic detailed costumes by Karl Ruckdeschel. We soon discover that stage right represents the land of the rich, living in a fancy building, forced by construction to use the back door of their luxury accommodations. Out back in the dead end alley, stage left, are the much less fortunate, who loiter; watching and taunting the upper class with disgust mixed with envy in every vulgarity thrown. The disparity is bleak, sad, and through this play, we get a glimpse into the hearts and souls of the desperate. 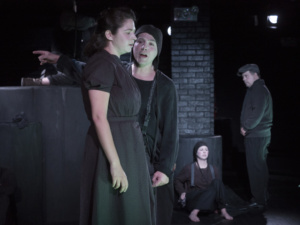 Hanging out on a symbolic pile of blocks representing an East Side wharf is a gang of boys played with a surprising depth and awkward exaggeration by three talented young women (Emily Kratter as Milty, Regina Betancourt as Spit, Lynn Mancinelli as Angel) and one young male, Jon McCormick, as their leader, Tommy. It’s difficult at first to adjust to their antics, as it is in no way trying to be realistic, but the abstract speaks volumes about these boys and their situation, and eventually it crawls under your skin. Trying to keep an eye on the young lad, is Drina, a working-class girl, well played by Shira Averbuch, who has tried her best to keep her younger brother, Tommy out of trouble since their parents died.  She also has her touch of hopeful romanticism secreted away under her worn exterior. 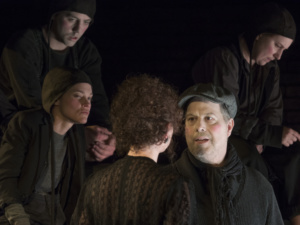 The four rascals, paying little attention to Drina, find themselves getting in all sorts of trouble with the rich folk that come their way, especially the wealthy older Mr. Griswald (Spencer Aste). The ‘kids’ do an admirable job playing these foul-mouthed tough guys that hang around the alleyways causing mischief.  Milling around them, is the down on his luck architect, Gimpty, played with a tender edge by George Demas and the girl, Kay portrayed effortlessly by Britt Genelin.  What transpires between this two is completely engaging and sweet.  Gimpty struggles with unemployment but dreams of rebuilding his neighborhood and rising out of poverty. Having been a gang member in his youth, he has managed to finish high school and go on to college, but hardships have forced him down into deep poverty and hopelessness. Kay wants to love and be with him, but sees a brighter future with the handsome young rich guy, Phillip Griswald, meticulously played by Jake Murphy. There longing for each other has a tender yearning quality that resonates across the theatre, both in its care and in its destruction.