Dear Evan Hanson My Vote For Best Musical of The Year

Dear Evan Hanson My Vote For Best Musical of The Year 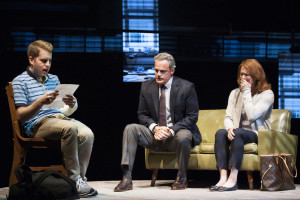 The best show that I have seen all year, hands down is the new musical by Benj Pasek and Justin Paul called Dear Evan Hansen at Second Stage. Considering I have seen over 300 shows this year, this is a mouthful. With it’s near perfect score that hits emotional connected highs by the duo that already have under their belt A Christmas Story the Musical and Dogfight, amazing orchestrations by Alex Lacamore (Hamilton), subtle direction by Michael Grief (Next to Normal), a layered and truthful book by Steven Levenson and an award winning performances by the cast but especially Ben Platt (“Pitch Perfect” 1 and 2) this musical will get under your skin and speak in so many ways. 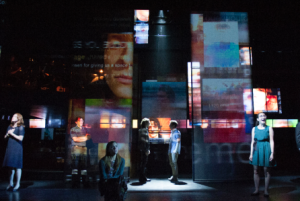 The show starts as Evan is given the task of writing encouraging letters to himself by his therapist. You see Evan is not comfortable with who he is, he has no friends, is afraid of people and can barely go outside his house. He is on medication, has a cast from a “fall,” is in love with a Zoe (Laura Dreyfuss) who will never notice him and is 17 and in high school. Instead of writing an encouraging letter he writes the truth of how he feels. The class bully Conner (the wonderful Mike Faist) who is actually no better off than Evan steal the letter and then ends up committing suicide. When Connor’s parents (Jennifer Laura Thompson and John Dossett) find Evan’s letters, they assume the note was written by their son to Evan. Evan tries to tell them the truth, but they are so much in pain that Evan allows the untruth to continue. Suddenly he has a family who cares about him and the girl of his dreams Zoe was Connor’s sister. The other misfits of the school (Kristolyn Lloyd and Will Roland) become involved with Evan’s speech’s becoming viral. Together they start “The Connor Project,” a youth empowerment group and organize a Kickstarter campaign, to fund an apple orchard in Connor’s honor. When the original Dear Evan Hanson letter is published the web of lies threatens everyone in its wake.

What makes this show so extraordinary is Evan is not a great person, but he is a realistic version of what is out there. Once the lies begin nobody will truly win but they will grow up take stock and expose the best and the worse of each other. In Evan’s song ”Words Fail” he finally owns up not just for himself but for the sake of others. It is an emotionally worth song that Mr. Platt knocks out of the park while sobbing, falling apart and allowing us to see vulnerability on such a level it is inspiring.

The rest of the cast is also emotionally connected, layered in what could have been one-dimensional roles and willing to let us see the flaws and strengths of their talents. The one character I have not named yet is Evan’s single parent hard working mother played by the exquisite Rachel Bay Jones (Pippin). Her depth and rawness is so passionate and understated that she is a joy to watch. 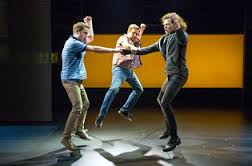 Michael Greif allows us to follow this tale and be sucked into it’s simplicity that turns so complicated in a flash. Pasek and Paul’s score is joyous, heartbreaking and fresh. When the trio of boys sing “Sincerely, Me,” you want to know the choreography by Danny Mefford (Fun Home) and join in. David Korins’s set, with video projections of Facebook posts, allowing us to see how fast something can go viral and the dangers and strengths it brings.

Here is an original musical that didn’t skip any steps, wraps it’s audience in it’s arms and allows the music, the story and the characters to do their job. This is a show in a season that seems so manipulated to give out a message of hope. Here being an outsider is the norm, if only we would step out of our own pain to see that we are not alone.

I expect this to move to Broadway and if The Humans were not playing at the already owned Second Stage theatre I would say it would go there. I am thinking the Circle in The Square. This show needs to stay in a smaller theatre to keep it’s closeness.