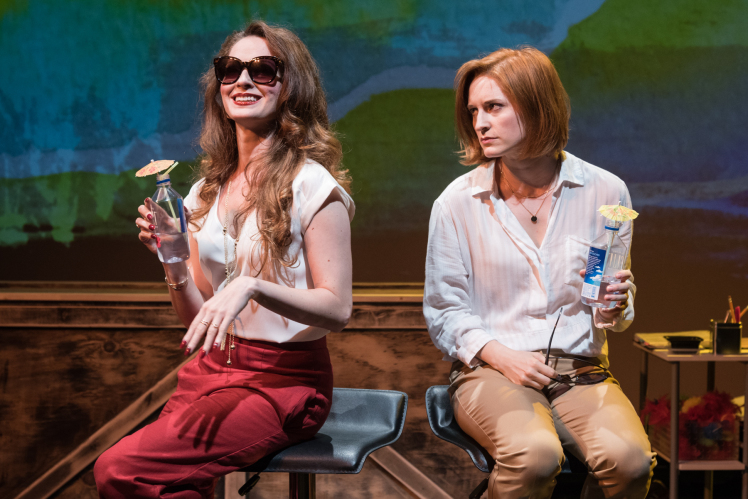 Dear Jane, Slow Down and Focus. You’re Losing Me.

Dear Jane, Slow Down and Focus. You’re Losing Me. 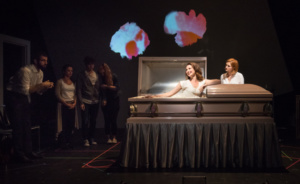 What would a play look like if you took hundreds of pages of someone’s diary, and threw them up into the air.  And after letting them all land on the ground in a scattered mess, you gathered up maybe twenty-five or thirty of those pages randomly, and tried to create something out of the pieces of the puzzle in the order you picked them up. Think of Dear Jane, by Joan Beber, as that something, a play made from all those tidbits of a person’s life, out of order. But in this case, it is told by someone who can’t focus too long on any one page and who has a tendency to want to move swiftly from one to another, especially the bits that are troubling or traumatic. Does that sound like a good idea? Or a colossal mess? 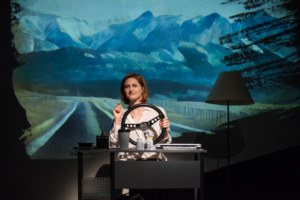 The first few scenes held promise.  A wonderfully authentic gathering of actors getting ready to rehearse a play, doing all those strange and wonderful things actors do: vocal exercises, physical acts to limber themselves and/or shake off the real world they are about to leave behind.  Fictional Julie, played by the talented Jenny Piersol standing in for the real life author, has written a play, and she has gathered this band of thespians to work on the piece as she struggles through the emotional journey she is both writing and living. Reading a bit from the program, we are given this note from the actual playwright: “Dear Jane is my most meaningful play. It is about me and my identical twin, she died ten years ago. We adored and hated and adored each other. She was first born and first to die. She was everything to me”.  So I was ready, prepared, and a bit disturbed by this note all at the same time, for this very personal exploration into what it all means; to be a twin, and to survive when the other is gone. What I wasn’t prepared for was the distance the playwright has placed between herself and the painful story. 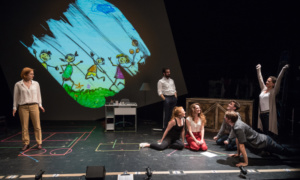 All of a sudden we are with Julie, as she is driving a car down a the country road.  She gets a call, hears about her twin sister’s death, slams on the brakes, and then without a moment to take in the enormity of that news, the play shifts time and moves on to another scene.  It feels shocking, to say the least.  Are we just supposed to just hold onto that piece of devastating news? And why the car and the projections of a road in the back? It feels random and meaningless, much like many of the scene changes and shifts in time.  The projections, designed by lighting designer Gertjan Houben (Irish Rep’s Crackskull Row) are beautifully done but as meaningful as the scenes in front of them. There doesn’t seem to hold any reason to these quick succession of scenes, but we are given no time to dawdle on such details. The set is forever in flux, with lots of movement of props and objects that seem unnecessary (scenic design: John McDermott; costume design: Lara De Bruijn) and trivial. This thing keeps moving forward and backwards quickly and without warning, from short scene to even shorter scene. Because maybe, just maybe, if we stand in one place and let one scene sit in the emotion that the information has given us, even for a moment, it might become real and hard to deal with.  So we drive on forward, not slamming on the brakes for anything or anyone.

Lastly, there is another subject shoved into this drama, the politics of a death row inmate, Tommy, portrayed with a sensitive air by Joh Kovach.  Julie is one of his only visitors and she tries with all her might to save him from lethal injection. I wasn’t quite sure why she took up this cause.  I think it had something to do with her sister, but I can’t be sure. There is a beauty in this scenario, but also a feeling of patting oneself on the back.  It doesn’t seem to fit with the concept of the rest of the play, the sibling rivalry and her mourning.  It just hangs there, quite dramatically as a thing that she did, and not much else. I will reiterate that the cast gives it their all, and do their very best (to different levels of success) with the material given, but as a whole they are not seasoned enough to pull it off.

In therapy, sometimes we propose to a person who is in the midst of an upsetting moment, the possibility of just pausing and staying with an emotional moment. Asking them with compassion and empathy, to take a minute or two to feel what they are feeling. And if they are feeling safe enough, to let the emotion envelope them, and together, we can explore what it truly is and feels like.  This is what is needed in this play, yet never attempted.  Dear Jane, needs to stop for a minute or two, and say, “this thing hurts, can we explore?” and only than can one connect, and move forward into peace and understanding.