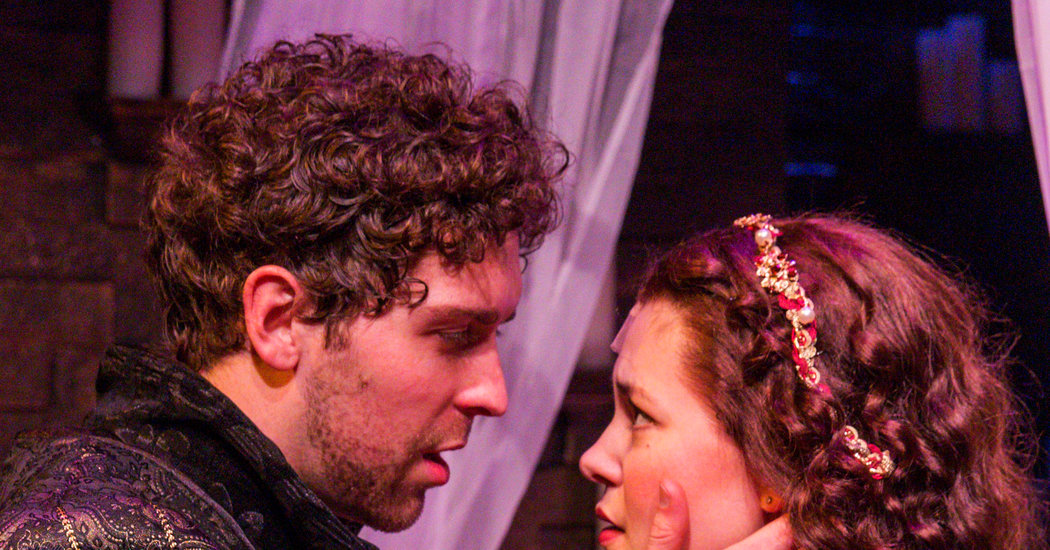 Death for Five Voices The Obsession With Music

Death for Five Voices The Obsession With Music 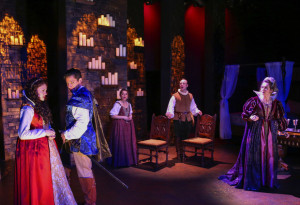 Prospect Theatre Company’s Death for Five Voices is a beautifully sung chamber opera with music and lyric’s by Peter Mills. Based on the true story of Carlo Gesualdo (Nathan Gardner), a contemporary of Shakespeare and Galileo in the late 1500’s. This piece concerns the violent death of his wife Maria D’Avalos (Manna Nichols), her lover and Carlo’s best friend Fabrizio (Nicholas Rodriguez) and the circumstances leading to thier grizzly murder. 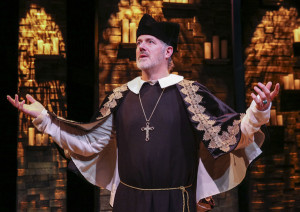 The show begins with Carlo’s uncle Alfonso (Jeff Williams), a priest who wants to be Pope or at the very least a Cardinal making a deal with Girolama (Meghan McGeary), for her son Carlo to marry his cousin Maria D’Avalos. Carlo’s only brother has just died and he has just been made Prince of Venosa. Carlo must marry and sire a child for the property and titles to stay in the Gesualdo’s name. Carlo’s passion is music and it is his music that drives him. He is obsessed with two or more simultaneous lines of independent melody being sung at the same time. His uncle wants him to give his talent to the church, but Carlo is reluctant. He is a man driven to acts of violence, so he stills that with hunting. When told to marry his cousin, Carlo is elated as he has been in love with her since he was 13 and she was 17. Maria at first is fine with the marriage and produces a son, but as time goes on she falls for Fabrizio and for two years behind her husband’s back has an affair with him. When he is told he is reluctant to believe until he catches them in the act and savagely not only kills them, but mutilates their bodies. 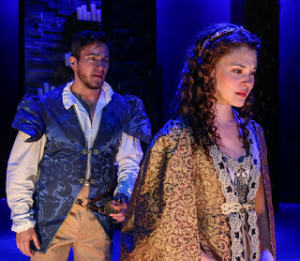 This story has inspired a Werner Herzog film, eleven operas and countless novels. Death for Five Voices plays around with some of the facts and the result is that though the music is beautiful and the staging by Cara Reichel haunting, the show never really goes anywhere. The characters are written one dimensionally and when they act out there seems to be hardly any reasoning. At one point Carlo attacks Maria’s servant, Sylvia (L.R. Davidson) with little provocation. Maria never sees this, she seems in love with her husband and yet she turns on him, for his best friend without a moment of reckoning. Another thing is the piece is called Death for Five Voices and added into this mix is Carlo’s servant, Pietro (Ryan Bauer-Walsh) which makes this either six voices with a composer or seven voices striving in the dark to be heard.

The cast is possessed with wonderful voices with Ms Nichols and Mr Williams standing out for their acting choices. Mr. Gardner who is extremely talented has been given the short end of the stick, as the role gives him nothing to define this man obsessed with music, depression and obsession.

What is thrilling about this operetta is that Gesualdo’s music is blended in with Mills and it is the kind of music, that is almost God like. You almost wish that this piece was being sung in a church where the sound would resonate, however the set by Ann Bartek consisting of  stone pillars, lit with multiple candles and a bed that dominates does the trick in setting the mood. The costumes by Sidney Shannon are also well done.

Death for Five Voices will not please most people, but if music that goes in interesting places and evokes a sense of mortality send you as they do me, this piece will at least deliver.

Suzanna BowlingJune 22, 2022
Read More
Scroll for more
Tap
ASPCA Celebrates Its 150th anniversary With Second Chance Dogs
Lea Salonga “Song For You” with “I Can’t Make You Love Me”